Ahead of the T20 World Cup Super 12 encounter against India, if there had been any concerns about the fitness of Shaheen Shah Afridi and now it has been dispelled by the pacer. The left-arm seamer bowled a brilliant opening spell in the warm-up fixture against Afghanistan at the Brisbane Cricket Ground, and his perfect yorker led to Rahmanullah Gurbaz being taken off the field on a teammate’s shoulders.

Shaheen Afridi, who has been missing international cricket for quite some time owing to his injury, returned to bowling in Pakistan’s first warm-up game against England. He returned for the next match against Afghanistan and opened Pakistan’s innings with the ball.

Haztratullah Zazai and Gurbaz opened for Afghanistan with the aim of making a big impact, but little did the latter know about the fiery yorker that he had coming on the very first ball that he faced. After conceding no runs off the first three deliveries, Hazratullah Zazai managed to take a single off the fourth ball and change the strike.

After that, Shaheen Afridi delivered a vicious yorker that struck Gurbaz’s left foot directly and left the wicket-keeper batter in excruciating pain. It struck his front foot before he even had a chance to get close to putting his bat down in time since it the ball was full, rapid, and swinging in. The umpire had no hesitation in giving it out, but Gurbaz was already down and writhing in pain so that wicket was the least of his worries.

Rahmanullah Gurbaz, who appeared to be in no way at ease, was being treated by the physios when the play was temporarily paused. After some time, the Afghanistan opener couldn’t walk and had to be helped off the field by a substitute fielder. The toe-crushing yorker proved like a ray of hope for Afridi and his team, but it did no good to the Afghanistan side.

ALSO READ: Reece Topley Ruled Out Of T20 World Cup 2022 Due To Back Injury 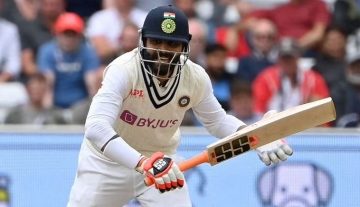 News
By CricShots - Nov 23, 2022
Ravindra Jadeja Will Not Be Taking Part In The Bangladesh Tour