The contentious and ostensibly ageless cricketer, Shahid Afridi has always been able to gather a lot of audiences only with his heroic efforts on a cricket field. Off the field, he has been regarded as one of the most charitable cricketers in the history of the game. His sweet gestures help people to redefine the camaraderie shared between the on-field ‘arch-rivals’, India and Pakistan.

The admiration of Afridi has notched further up one echelon up after he had asked the young lady holding Indian national flag, “Apna Flag Seedha Karo”. His priceless gesture led to building the ‘lost’ loving concordance between two countries. Having been appreciated by almost every famous Indian cricketer, the former Pakistani skipper was further asked about his positive love towards others. Speaking to newsmen in Karachi on Monday, Afridi said we should respect the flags of other countries.

Talking about the gesture, Shahid said, “We should respect the flags of other nations and that’s why I asked them to hold their flag in a proper way. I also wanted them to have a better picture.”

Shahid Afridi also talked about the cricketing relations between India and Pakistan and what is the future prospect from here on. He reckons that players from both the countries share a good relationship and wishes that cricket can help in the betterment of relation. He said, “The cricketers of both the nations want to play for the betterment of relations between the countries. We are ambassadors of peace and want to spread love and peace around the world. We all are good friends and had a great time playing Cricket on Ice.”

Afridi also made a statement on the national team’s recent humiliating whitewash in the one-day series against New Zealand, charging a lack of practice on the players’ part for the 5-0 loss. He explained, ”Before Pakistan went to New Zealand they had trained at the camp for just a day. When you know you are going to play with a tough opponent in tough conditions you should have practiced more.” 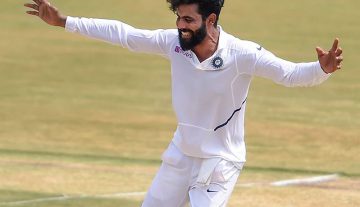 Article
By Shruti - Oct 8, 2019
Naina Jadeja Has Something to Say About Ravindra Jadeja