Bangladesh is currently locking horns with Pakistan in the second match of the two-match series taking place on Bangladesh soil. However, the play on the second day of the match was called off due to rain where the veteran Bangladesh all-rounder Shakib Al Hasan could be seen having all the fun.

After the play was called off, pitch covers were brought to the field which got wet too and Shakib Al Hasan then decided to run and slide on them. He could be seen having all the fun while there were no other players on the field. Talking of the match, Pakistan is currently batting on 188 runs after losing their two wickets after stumps.

ALSO READ: Axar And Jadeja Recreates Their Names With Ajaz And Rachin

Talking of Shakib Al Hasan, he was recently in news for other reasons as well after he stated that he was included in the squad for the tour to New Zealand without his will. BCB President Nazmul Hassan said that Shakib had informed them ‘unofficially’ for not taking part in the series but he didn’t tell them anything on the official note.

As per the quotes in ESPNCricinfo, Shakib Al Hasan said, “He hasn’t informed us officially. He told us unofficially. We told him to inform us officially. He has to give a reason. Shakib contributes with either bat or ball. He strengthens the team combination. There’s no substitute for Shakib.”

ALSO READ: India Registers Their Biggest Ever Win In Terms Of Runs In Test Cricket

Their tour to New Zealand is all set to begin from 2022 and BCB have named the 18-man squad for the same. For the current series, Pakistan have already whitewashed them in the T20Is and won the first Test as well. Bangladesh can now only aim to draw this series. Though Hasan has added that he is uncertain for the NZ Tests, skipper Mominul Haque wants him to be there as he is the only senior player in the squad apart from Mushfiqur Rahim. 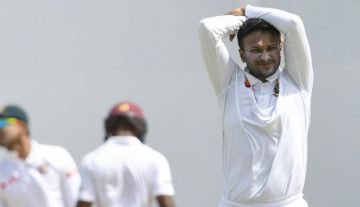 News
By SMCS - Dec 26, 2022
“It is slightly disappointing” – Shakib Al Hasan on missing catches during the 2nd Test