Ahead of the Ranchi ODI against Australia, former Indian skipper MS Dhoni hosted Team India for a dinner at his farmhouse and even, Siddharth Kaul also hosted the Indian players at his Chandigarh house. Now, that the Indian team is Delhi, Mohammed Shami took the opportunity to host the team for dinner at his residence on the eve of the series decider as it is leveled at 2-2.

It would be a crucial match for the men in blue who are not in habit of losing a series at home. It seems Shami did the right thing to just loosen up the players ahead of the big game. He took to Twitter to thank his colleagues for turning up at his residence. His post was captioned, “Thanks for all team India member’s for visiting my home.”

Thanks for all team India member’s for visiting my home 🙏🏻🙏🏻 pic.twitter.com/EKDeEgL7Hs

In the picture, Rishabh Pant and Kedar Jadhav were seen along with Shami’s family and friends. It would be interesting to also see if Shami makes it to the XI in the series-decider as he missed the Mohali ODI. The game will also be India’s last international game before the World Cup later in the year in England and Wales.

WATCH – Shami Sends Glenn Maxwell’s Off Stump For A Cartwheel

Earlier, India lost the 4th ODI by four wickets at Mohali after setting a mammoth total of 358/9. Team India will hence be a little worried, whereas Australia will be riding high on confidence while walking into the decider. India would be hoping that Shikhar Dhawan and Rohit Sharma fire along with the Indian skipper, who has hit a purple patch. It would also be interesting to see if KL Rahul gets picked again.

In the absence of Dhoni, Pant would be mindful of impressing the selectors. He was rusty with the gloves at Mohali and would be hoping for a much-improved show in the big match. 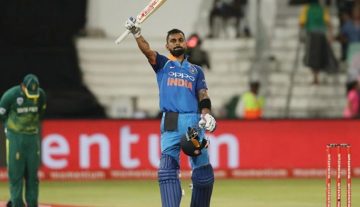