Former Australian all-rounder, Shane Watson has termed the Chennai Super Kings (CSK) skipper MS Dhoni as an evergreen cricketer and he feels that the latter just doesn’t age. Watson has been playing for the CSK in the Indian Premier League (IPL) under Dhoni since 2018 and has been a crucial part of the franchise in the last couple of years.

All eyes are on MS Dhoni, when IPL 2020 will be commencing in the UAE from September 19 and runs until November 10. MS has been on a sabbatical from competitive cricket ever since India suffered a loss against New Zealand ib the semi-final of 2019 ICC World Cup.

During a recent chat with the Times of India, Watson said, “MS still loves playing. He is an evergreen cricketer and it feels like he just doesn’t age. Look, with the kind of skills he has and the hard yards he puts in, MS can go on and play into his 40s. MS has been able to manage his body well. The way he is able to run consistently and showcase skills behind the stumps is just incredible. I am a big fan of MS.”

Shane Watson played a crucial role for CSK to win their third IPL title in 2018. In last year’s final against Mumbai Indians, the Australian was awarded Man of the Match for his 59-ball 80 that went in vain as CSK came close to win the match.

Talking about the nature of pitches in UAE, Watson said, “It definitely will. The pitches are going to be on the slower side. We have some high-quality spinners in our side and we should be able to capitalize.”

When asked about the fan support, the veteran all-rounder replied, “There is no doubt that the Yellow Army will be supporting us from far as they always do. It’s going to be a different experience and I will miss the rush that the crowds in Chennai always gave me. Having said that, we are playing for high stakes as the IPL is the best T20 tournament in the world and we have to quickly adapt.” 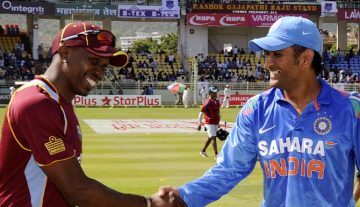 On This Day
By Sandy - Aug 27, 2018
On This Day: When Dwayne Bravo beat MS Dhoni in a thrilling encounter