When Indian pacers are showing their dominations in the world cricket in these days, 26-years old Indian pacer Shardul Thakur is growing up as another strong competitor among the Indian pacer. During India’s recently concluded tour in South Africa, Shardul impressed very much with his bowling.

Shardul Thakur featured in one ODI and two T20Is during India’s recently concluded tour in South Africa. On that tour, Shardul picked up 4 wickets in his only ODI match while he took a piece of wicket in each T20I.

Recently in an interview with The Indian Express, Shardul shared his long and patient journey to the Indian cricket.

Living in Palghar, Shardul regularly travels by train to play cricket for Mumbai or India. During his train journey, Shardul faces a lot of experiences including some taunts. While most people were hopeless on his dream to play cricket for India, Shardul was confident in himself. Talking about that, Shardul told The Indian Express, “People would often ask me when I’ll play for Mumbai and India in the train. Some would taunt me as well saying ‘why are you after cricket, itna door se aa ke thodi koi India ke liye khelega. Stop doing time pass’. But I knew what I had to do. I have devoted my life to cricket, and at the same time also finished my graduation.”

After returning from South Africa to India through the flight, Shardul returned his home by a local train. Many passengers were surprised to see him travel by local train. Speaking about that situation, the Indian pacer said, “They say the boy who used to travel with us is now playing for India. This time I boarded the train in Andheri after getting off the flight from South Africa. Straight from business class to first-class. I had my headphones on and just wanted to get home soon. But I could sense people in the compartment looking at me and wondering whether I really was “Shardul Thakur”. A few college kids then Googled my picture just to be sure and then asked for a selfie. I told all of them to wait till I got off at Palghar. Many were amazed that an India cricketer was traveling with them. Some old-timers were recalling how they’ve been seeing me in the train for years. But my feet remain very grounded. I have not received anything on a platter and worked hard for it.”

During that interview, Shardul also spoke about his strength in bowling. Talking about his strength, the Mumbai pacer revealed, “My strength is that I can swing the new ball. I am not focused on bowling at over 140 kph. I’m happy if I can bowl at 137-138 kph and have control over my line and length. It’s also about not going all out always. I get the ball to leave the right-hander. So in the longer format, I just prefer keeping the ball out there and play on his patience.”

Shardul also said that he begins with the same mindset in one-dayers while things changes in T20 cricket. He said, “In one-dayers, I start with that same mindset, occasionally holding the ball cross-seam. In the death, it’s all about having skills and executing them. T20 cricket is different, where the situation of the match changes nearly every two balls. You have to be flexible and keep your ego aside. You are making and changing plans out there.”

Speaking about his best dismissal in the recently concluded South Africa tour, Shardul remarked, “It was of Hashim Amla in the sixth ODI. He’d let go off 4-5 balls in one over of mine and then swung the last ball for four. Virat (Kohli) was at mid-off and told me if I was confident to slip in a bouncer after just two length deliveries in my next over. He’s gotten out to the short-ball before too. I tried it once and he tucked it for a single, but I did it again in the next over and I had him caught by the keeper down the leg side. It was a perfect setup.”

In the IPL career, Shardul had played only one game for Kings XI Punjab during his debutant IPL season in 2015. Missing the IPL in 2016, Shardul played for defunct team Rising Pune Supergiant where he showed his improving performances.

Talking about his IPL experiences, the right-arm pacer said, “When I was sent back by Kings XI Punjab midway, it didn’t sit well with me. When they said they wanted to release me to Pune (Rising Pune Supergiant) it took me 15 minutes to say ok. It was for the best. I’ve realised that you can achieve a lot in the Ranji Trophy and nobody watches you, but even one good performance in the IPL and everyone’s talking about you. I remember meeting Pravin Amre sir during that IPL I sat out and he told me that whenever my chance will come I had to be ready. So that’s what I did. I worked really hard on perfecting my yorker, slower ones and also kept visualizing various scenarios from the bench.” 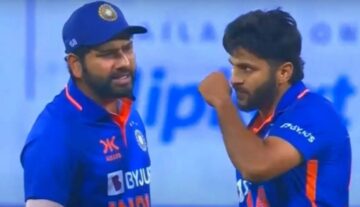