Ever since Rishabh Pant has emerged on the big stage he has often been termed as MS Dhoni’s successor in the team as the latter’s big-hitting prowess in crunch situations have waned in recent times. The youngster has delivered some great performances in the historic Test series win against Australia, and many argue that he should replace Dhoni in the ODI team for the World Cup. But in a recent interview, head coach Ravi Shastri gave a clarification that Dhoni in the limited-overs side is irreplaceable until he himself decides to call it a day.

In a candid chat with Michael Vaughan, Shastri went on to reveal that Pant considers Dhoni as his biggest hero and not as someone who is taking his place in the team.

As per the quotes in Daily Telegraph, the head coach said, “His [Pant] hero is MS. Every day he is on the phone to MS. I think during the Test series, he must have spoken more to MS than anyone else. It is great when you have that mutual respect. Virat Kohli and MS Dhoni, the respect they have for each other are unbelievable, so it makes my job in the dressing room so much easier.”

Dhoni was successful in silencing his critics by guiding India to the first bilateral ODI series win in Australia with three consecutive fifties and a Man of the Series-winning performance. With Dhoni slowly getting back to his form, he will help the team resolve the middle order problems. Team India dominated both in the batting and bowling departments, looks balanced for the World Cup as of now. But it is too early to say that the team has found a reliable batsman in Dhoni, who can finish all the games in the mega event later this year.

As for the young Pant, he will have to wait to become an ODI regular till the time the legendary cricketer is still donning the blue jersey. 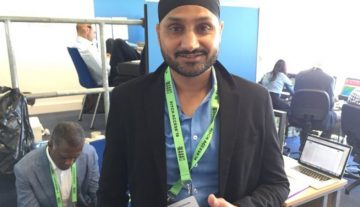 Article
By CricShots - Aug 31, 2018
Harbhajan Singh Has a Strong Reply For Botham And Holding