While the Indian Test team is currently battling it out with South Africa in Johannesburg, members of the ODI squad have also started preparing for the upcoming series at the National Cricket Academy (NCA) in Bengaluru. The limited-overs players will be leaving for South Africa in days’ time and would be raring to make a significant mark in national colors.

Meanwhile, veteran Indian opener Shikhar Dhawan, who’s known for his antics on social media, took to Instagram on Thursday (January 6) and shared a hilarious video featuring fast bowler, Bhuvneshwar Kumar, and leg-spinner Yuzvendra Chahal. While Dhawan and Bhuvneshwar were exchanging dialogues in the video, Chahal was at his goofy best in the background.

Captioning the video on Instagram, Shikhar Dhawan wrote: “Fast bowler aur batsmen mein bada farak hota hain. Aur pichey spinner se dono ko koi farak nahi pad raha. (There is a big difference between a fast bowler and a batter but we both are not bothered about the spinner sitting behind).”

Meanwhile, the upcoming ODI series would see Dhawan’s comeback in the white-ball team. Having led the team in Sri Lanka last year, the batter wasn’t picked for the T20 World Cup and also missed the subsequent T20I series against New Zealand. However, the 36-year-old now has a chance to prove his mettle again.

It must be noted that KL Rahul will be leading the ODI series as Rohit Sharma has been ruled out of this series due to a hamstring injury. Notably, Bhuvneshwar and Chahal will also have a point to prove as they aren’t anymore regulars in the playing XI. Meanwhile, India defeated South Africa 5-1 in the 2018 ODI series and would be determined to replicate their heroics. 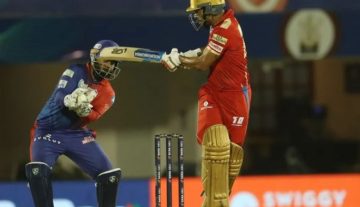 News
By SMCS - May 25, 2022
Shikhar Dhawan gets beaten from his father after his team fails to qualify for IPL 2022 playoffs