The young fast bowler, Shivam Mavi has opined that he is looking forward to playing under the captaincy of Hardik Pandya, saying the T20I skipper is someone who backs his players and keeps his calm on the field. Mavi, 24, was handed his maiden T20I call-up for the upcoming 3-match series against Sri Lanka, starting January 3. Shivam Mavi, who has found his mojo in competitive cricket after regaining full fitness, earned his T20I call-up after a fine domestic white-ball season for Uttar Pradesh.

He managed to scalp picked up 10 wickets in Syed Mushtaq Ali Trophy and 14 wickets in the Vijay Hazare Trophy earlier this year for Uttar Pradesh. The young fast bowler overcame an ordinary IPL 2022 season with Kolkata Knight Riders for whom he picked up 5 wickets in 6 matches and conceded more than 10 runs per over.  Shivam Mavi received the much-awaited call-up owing to his consistency as he was bought for INR 6 crore by defending champions and Hardik-led Gujarat in the IPL 2023 mini-auction.

As per the quotes in PTI, Shivam Mavi said, “Hardik Pandya supports every player. It is very difficult to be the IPL champions in the first outing but he managed to do it. He led Gujarat Titans from the front and became champions. He is a calm leader but took some bold decisions. As a captain, Hardik bhai is very shrewd and a master tactician. I know it is not going to be easy for me but I am just hoping to get a game, perform there and be a regular for India.”

Mavi’s former U19 teammates Prithvi Shaw and Shubman Gill have already made their debuts in international cricket well ahead of the fast bowler. Mavi’s reputation dipped after the IPL 2022 season but the work he put in behind the scenes helped him earn his maiden India call-up. According to the youngster, it’s better late than never.

Describing the same, Shivam Mavi said, “It’s a great feeling and a proud moment to represent your country. Shubman and Prithvi made their India debuts before me but I knew it’s all about the right time. Every individual has his or her luck and time. Yes, I was expecting something around INR 5 and 6 crore. I always wanted to be in GT because I have heard that their management is very good. GT has Hardik bhai and (Ashish) Nehra bhai, the two best thinkers of the game.” 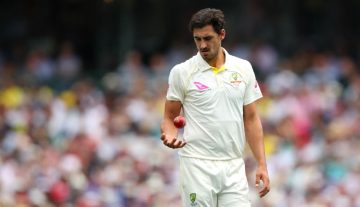 Social Shots
By CricShots - Jan 31, 2023
Mitchell Starc Will Be Missing The Opening Test Against India In Nagpur