After winning the first Test by 118 runs, Australia lost the second Test by 6-wicket against the hosts South Africa at Port Elizabeth. Talking about the reason for their defeat in the second Test, Australian skipper Steven Smith pointed out their middle-order batting failure against the reverse-swing.

In the second Test, Australian batsmen mostly struggled against the South African pacers, specially against Kagiso Rabada (5/96 & 6/54) who picked up total 11 wickets in the match.

While Australian team had a great opening start in their first innings at Port Elizabeth, they failed to capitalize that. South African pacers were looking dangerous during the reverse-swing in both innings, while Australian batsmen had no solid answer.

Talking about their major reasons for their defeat, Australian captain Steven Smith stated, “When the ball reversed, the middle-order (in the first innings) didn’t do their job. That was probably the part that hurt us the most. We were outplayed.”

While Australia put 243 and 239 runs on the board in this Test match, Smith believes that they were not too far from their victory. He said, “I actually think we weren’t too far away. Probably 75 runs (short) in the first innings and 50 odd in the second innings. Another 125 runs [and] things could have been different.”

Smith said that they need big hundreds from the batsmen which have not seen yet in this tour. However, he is hopeful to change the momentum in the next two matches where South Africa will miss their prime pacer Kagiso Rabada for suspension.

Smith spoke up, “If we’re getting batters scoring big hundreds then that helps us out. Unfortunately, we haven’t been able to do that but we have a good opportunity to turn it around in the next two Tests.”

Australian all-rounder Mitchell Marsh is suffering a groin strain. When Smith was asked about Marsh’s injury and availability in the next Test, the skipper replied, “He’s (Mitchell Marsh) telling me he’ll be fine but we’ll wait and see. I think all the quicks are going well, they are all feeling fine.”

Currently, the four-match Test series is in level with the 1-1 margin. The third Test of this series will begin on March 22 at Cape Town.

While their first Test behaviours had raised many questions, Smith felt their behaviour in the second Test was really well. He quoted, “I thought we behaved really well. We played in really good spirit and played good, hard cricket.” 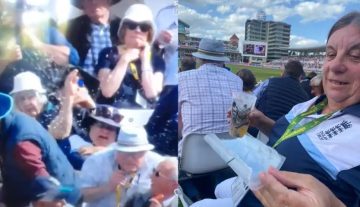 Videos
By CricShots - Jun 11, 2022
Daryl Mitchell Destroys The Beer Of A Fan With A Huge Six