Youngster Riyan Parag has come into limelight with the brilliant show with the bat in the recently concluded Indian Premier League (IPL) for Rajasthan Royals. He scored his maiden IPL fifty this year against the Delhi Capitals in the final IPL 2019 match for Rajasthan and became the youngest to score a fifty in the IPL. However, he has revealed that he gets inspired by none other than Smriti Mandhana, the stylish left-handed opener of India.

This was Parag’s first IPL experience and that too was amazing. He shared the dressing room with not only Indian players but also International players like Steve Smith, Ben Stokes, Ajinkya Rahane etc.

“I have learnt a lot from my first IPL stint. In IPL, you play with your idols and legends of the game. Just to share the dressing room was surreal,” Parag said to India Today.

Read here: Mohammad Amir is keen to give his 100% in the World Cup

His maturity was seen during the game against Kolkata Knight Riders where Rajasthan was slowly going towards the defeat and was needed a giant effort from someone who could pull off. He smashed a magnificent 47 off 31 balls and guided his team to a comfortable win. He shared that game as the most challenging experience in the whole tournament.

“The time I felt really nervous this season was before the match against Kolkata Knight Riders. I don’t have a great record at the Eden Gardens. Before the KKR game, I’d scored nine runs in each of the three innings I’d played there. So the knock I played(47 off 31) that day is the most special ones for me this season. I feel pressure brings out my A-game,” he added.

He further revealed that he used to follow Women’s cricket as well. Alongside a few male cricketers like the legend Sachin Tendulkar and India captain Virat Kohli, he follows Smriti Mandhana, the ICC NO.1 batter as well as BCCI’s Best Women’s Cricketer of the year 2018. Even he shared that he admires her and tries to copy her batting style also.

“My dad is one of them (idols). He has to be the first one. Then there’s Sachin sir and Virat Kohli. And in women’s cricket, I’ve followed Smriti Mandhana since she used to wear glasses and play with a BAS bat. I was really young then. I love the way she times the ball and caresses it through point. I’ve tried copying that as well but it didn’t work out,” he further expressed. 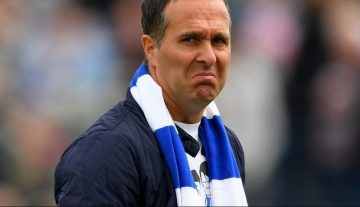 Twitter Reaction
By CricShots - Oct 11, 2019
Michael Vaughan Gets Trolled For Taking A Dig At Indian Pitches