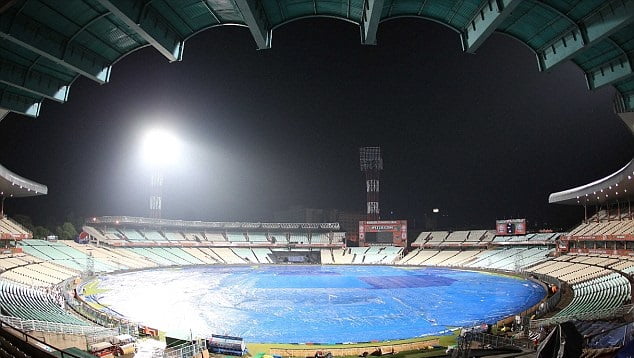 Cricket Association of Bengal (CAB) President Sourav Ganguly has clarified that despite the uncontrollable rain in the city, Eden Gardens will surely be hosting the blockbuster India vs Australia game on September 21.

Ganguly’s comment came when Eden Gardens curator Sujan Mukherjee told Cricketnext that he has not been able to touch the wicket, let alone prepare it for the encounter. Talking to the reporters, Ganguly said, “The ground is in good shape and will be ready for the ODI. It rained a lot these few days but we have all bases covered.”

Earlier, Sujan said, “It has been raining continuously in Kolkata. I am obviously tense and worried because I need a clear sky and the sun baking the wicket so that we can prepare a good wicket. Even until Tuesday we had rain and then again, the forecast remains the same for the next few days. In fact, rainfall is expected even during the time of the ODI and those hailing from Kolkata would know that the scenario remains the same every year around this time. Eastern India experiences rainfall in these months before the monsoon retreats.”

India’s head coach Ravi Shastri has always been in favor of making wickets according to the strengths of the home team. When curator was asked if that meant that the wicket could very well be underprepared for the second game of the series, he replied, “No, there is no threat of an underprepared wicket as such. We have prepared quality wickets in the last couple of years and don’t expect anything but the best effort from our groundsmen. But then, you cannot fight nature. The situation might well see the home team getting a slight advantage as the pitch will take a turn and the dampness will make stroke-playing difficult.”

He further added, “I don’t really see the game coming under threat due to the wicket. It is just that the rain is creating havoc and well I can only wait and hope that I get some time to prepare the wicket as per norms.”