MCC World Cricket Committee members recently raised some issues in the world cricket and also discussed to fight against these. Former Australian World Cup-winning captain Ricky Ponting and former Indian skipper Sourav Ganguly were also present as the members of the committee and gave their respective views.

The committee members have expressed their concern over the continuous rising of slow over-rate incidents in every international format. Under the leadership of former English skipper Mike Gatting, the committee recently discussed the ideas to reduce the slow over-rate offence. They have brought the ideas like ‘shot clock’ to keep over rates in check, harsher penalties etc.

Also read: England Announces Their Squad For The Lord’s Test

Talking about slow over-rate concern, former Aussie WC winning skipper Ricky Ponting said, “So we’ve talked about the idea of the shot clock and that’s basically the dead time in the game. It’s not going to be when the bowler is at the top of his mark and running in because that’s obviously hard to gauge. To put a certain amount of time for an over to be bowled is hard when you get a few boundaries or whatever.

“But the dead time in the game — end of the over the fielders and bowlers have to be back in position and that’s non negotiable. The same with the new batsman coming to the crease, the bowling team have to be ready when he gets to the crease.”

Talking about the harsher penalties for the slow over-rate, Ponting proposed to go beyond the financial fines. He believes that if the run penalty counts due to the slow over-rate, then the on-field captains will take more responsibilities to complete the game in proper time.

Ponting commented on the harsher penalties, “If they are not in a position for three or four overs (to catch up with over rate) that could be (a penalty of) 20 runs and in the context of the game we saw last week that could be the difference in a Test match. We feel that what has been in place for a long period of time hasn’t worked. It’s still the responsibility of the on-field captain that his team are ready to play in an appropriate amount of time.”

Former Indian captain Sourav Ganguly, who is one of the big supporters of day/night Test, once again raised his voice about the day/night Test. While he believes that it will help to return the crowds in Test cricket, he also believes that Indian cricket has its own ideas and the world cricket will have to wait till everyone accepts it.

Apart from Bangladesh and the two new Test teams (Ireland and Afghanistan), India is the only other team who hasn’t yet made debut in the day/night Test cricket.

While earlier the BCCI decided that the day/night Test will be held in India in the upcoming home season, later that idea was dropped due to Indian team management’s disagree. Ganguly said that there are a lot of issues need to be solved before making the day/night Test debut.

Ganguly said on that, “It was decided in the technical committee meeting last year to have a day-night Test at Rajkot this season when the West Indies come in. But the Indian team management have their own ideas and communicated that they were not ready. Maybe it’s the dew conditions at night, or maybe it’s the Kookaburra ball. SG Test does not have a pink ball yet, so we will have to bring in the Kookaburra ball. There are a lot of issues that haven’t been resolved (before day-night Tests come to India).”

The committee also discussed the prospect of MCC touring Zimbabwe to monitor the situation there, new 100-ball format, head protection for the bowlers and off-course the ball tampering issues which have become serious in recent times.

MCC committee has also welcomed the ICC’s goal to include the women’s cricket in 2022 Birmingham Commonwealth Games and also to introduce the cricket in 2028 Los Angeles Olympics. 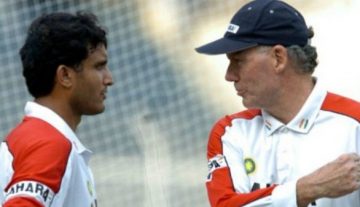 News
By Aditya Pratap - Feb 26, 2018
Ganguly revealed brother Ian was not in favor to appoint Greg Chappell as coach