The Indian fast bowler, S Sreesanth has made a ballsy claim that if got a chance, he will send Steve Smith’s middle stump for a cartwheel after his return to competitive cricket after serving a ban of 7 years which ends on 13th September. He also opined that the Indian skipper, Virat Kohli is a better batsman than Smith as the date has been going on for who is better between the top-2 Test batsmen.

The 37-year-old called  Smith hard-working too but Sreesanth feels that Kohli is on a “next level”. He said, “I am just waiting for my comeback to uproot Smith’s middle stump and say ‘Thank You, Smith. I respect Virat for his work ethics. In fact, Steve Smith also worked hard, but Virat is at the next level. From 2013 to 2020, Virat Kohli carried Indian cricket on his shoulders. There’s no comparison.”

Sreesanth also acknowledged that Steve Smith and David Warner made comebacks after serving one-year bans for their involvement in the ball-tampering scandal, which motivated him.

Kerala-born pacer explained, “Smith and Warner came back and performed well, that motivated me, I should be thankful to them. They persisted with the game and they didn’t give up. Without being guilty I’ve lost seven years of my life. I had 12 surgeries as a fast bowler, I just want to get back and bowl. Smith and Warner showed me a way forward but I am looking forward to bowl to them for sure.”

Sreesanth confirmed that he will be aiming to take part in IPL 2021 as he picked three teams and wishes they could buy him. He said as a fan he would love to join Mumbai Indians to learn from the batting legend, Sachin Tendulkar there. He also expressed his eagerness to play for Royal Challengers Bangalore (RCB) and Chennai Super Kings (CSK).

ALSO READ: Sreesanth Recalls When He Fought Hard With Depression

During a recent Instagram live session, Sreesanth said, “Obviously I will put my name in IPL 2021 Auction. But, as a cricket fan, it is Men In Blue Mumbai Indians, because of Sachin Paaji, I played cricket to meet Sachin Tendulkar. If I get an opportunity to play for Mumbai Indians, why not, it will be a great thing to learn from Sachin paji from the dressing room. Also, I would love to play under Dhoni bhai or RCB as well.”

Notably, Sreesanth had earlier expressed his urge of representing India in the 2023 ICC World Cup as well. 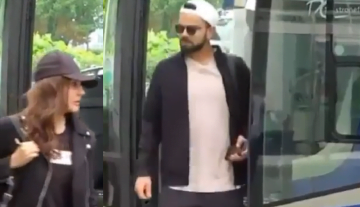 Trending
By CricShots - Jul 5, 2018
Virat Kohli and Anushka Sharma Found Together In Cardiff