On Tuesday, Sri Lanka has decided to order a criminal investigation into an allegation of the 2011 ICC World Cup final was “sold” to India, Sri Lanka Cricket (SLC) official said. India’s brilliant win over the Islanders was voted the greatest sporting moment from 2000-2020 in a Laureus poll earlier this year but it has not been a memorable event for a lot of people in Sri Lanka.

Describing the same to AFP, the secretary to the sports ministry, K.D.S. Ruwanchandra said, “A criminal investigation has begun. It is (being) handled by the (police) independent Special Investigation Unit on sports-related offenses.”

Former sports minister Mahindananda Aluthgamage claimed earlier this month that Sri Lanka sold the match to India. He had said, “I feel I can talk about it now. I am not connecting players, but some sections were involved.”

The island nation’s 1996 World Cup-winning skipper Arjuna Ranatunga has also expressed his doubt on the result and previously demanded an investigation. Local media reports said former chief selector for the 2011 final, Aravinda de Silva, had been summoned for an interview with investigators on Tuesday.

After making a strong start, Sri Lanka lost the game against India in the final at Mumbai’s Wankhede stadium by six wickets. Sri Lanka batted first and scored 6/274 off 50 overs helped by a brilliant century from Mahela Jayawardene. They immediately took the control of them after dismissing the batting legend Sachin Tendulkar for just 18, leaving the hosts 2/31.

But India made a dramatic comeback owing to match-winning knocks from MS Dhoni (91*) and Gautam Gambhir (97) but also poor cricket by Sri Lanka helped the hosts. Kumar Sangakkara had said Aluthgamage should share the proofs of his allegations with the ICC.

Match-fixing was made a criminal offense in November in the country and reports suggest that the ones who will be found guilty will receive huge fines up to 100 million rupees ($555,000) and up to 10 years jail. 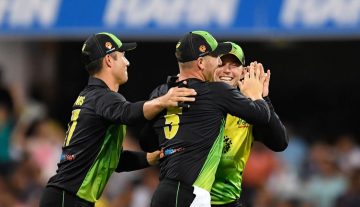