Australia captain Steve Smith has added another feat to his already illustrious career as he slammed a dignified hundred in the fourth innings of the fourth Ashes Test against England at the Melbourne Cricket Ground, to equal Sir Don Bradman’s record, on Saturday.

Smith remained unbeaten after a 275-ball knock of 102, having nudged Australia to 263 for four and a lead of 99 runs before the captains decided to end the match midway through the final session.

With this latest hundred, Smith’s enchanting form at the venue continued as he now has four consecutive centuries at MCG in Tests — a feat previously achieved only by the great Don Bradman.

Not just this, Smith also became the joint second quickest batsman to slam 23 centuries in Test cricket. Smith beat the likes of Sachin Tendulkar and Mohammed Yousuf to sit pretty at the second spot in this illustrious list.

With this hundred, Smith also equaled the record of Allan Border and Steve Waugh in the list of most 100s by a Test skipper.

During the course of his ton in the fourth Test, Smith also completed 3000 runs Test cricket in Australia. Also, Smith continues to be the leading run-scorer in the on-going Ashes series with 604 runs at an average of 151. 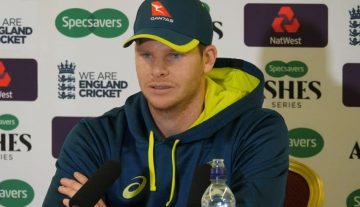