Former Australian skipper, Steve Smith was seen getting furious at the Usman Khawaja after a horrible mix-up with teammate Usman Khawaja in fag end of Day 1 of the first Test against Sri Lanka in Galle on Tuesday. Australia finished with 98 for three on a day that witnessed 13 wickets fall as the visitors are now trailing by 114 runs. Nathan Lyon’s sensational five-wicket haul had helped the Aussies to help Australia bundle Sri Lanka for 212.

The incident took place in the 20th over of the second innings when the Lankan off-spinner Ramesh Mendis dished out a flighted delivery. Steve Smith missed the ball which crashed onto his pads and rolled to the offside. Smith immediately took off for a single and Khawaja responded to it as well.

But the Khawaja pulled out midway, and Smith, who was well past the halfway mark, had no time to return back to the crease on time as Niroshan Dickwella collected the ball and threw it down to Kusal Mendis, who came sprinting down from short leg before chipping the bails off. Smith was left furious at Khawaja’s decision as he walked back shaking his head.

Here is the video of the run-out of Steve Smith:

Earlier, a brilliant spell of Nathan Lyon helped Australia bundle the hosts for 212. It was his 20th career five-wicket haul and ninth on Asian soil. The figure also helped him go past Sir Richard Hadlee in the all-time wicket-taking list to take the 12th spot with his tally of 432 wickets.

Talking about his performance, Nathan Lyon said, “I was really proud the way we came back after tea and stuck to our plans and we were able to get the late rewards and knock them over. Saying that, I see this game as even, there’s still a lot of work to do.”

Hereis how the netizens reacted to the run-out of Steve Smith:

Regardless of who is at fault, really poor afters from Smith. That is not a leader

A range of emotions from Steve Smith as he walks back and none of them are of any kind of endearment towards Usman Khawaja. Fortunately, Australia have two team buses. Don’t expect the two to be in the same one tonight #SLvAus pic.twitter.com/5TzruZsUMd

Petulant from Smith, regardless of who’s fault it was. Bit of self control mate.

Yes it’s misunderstanding or miscommunication but the way he is over reacting is just too childish. Another brain fade moment of Mr Smith who is still a vice captain and the captain and coach who sail that ship in those 2 years of storm are out of team. Figure that

Smith's first call is no. Regardless of whose fault it is, he's an international cricketer, and the display of petulance can wait for the change rooms.

Call me crazy, but if I’m the non striker, I’m not running when the striker puts his glove up in the air like that, no matter if he subsequently takes off……

A bit of dignity walking off please Steve Smith. Keep the hopefully mature and reflective discussion with your team mate for the privacy of the dressing room. You being so childishly demonstrative is more of an embarrassment than the runout.

Smith makes the stop signal hand gesture just before he takes off for the run, bit hard on Khawaja I reckon.

again 100%. That situation has happened to anyone that's played cricket – I've done it and been on the receiving end. Smith is 33 now – grow up and put Khawaja and the team first.

Smith at fault here. He started, stuttered then started again – the hesitation made Khwaja doubt Smith was committed to running. 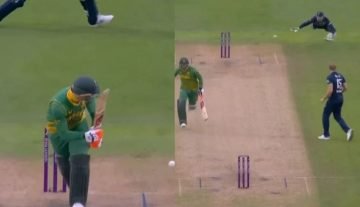