On Sunday. former Australian skipper, Steve Waugh said that the hosts will start as favorites during India’s Down Under tour later this year due to a full-strength batting line-up and a more settled bowling attack. Virat Kohli and his men rewrote the history when they defeated the Aussie on their own turf last year in the absence of David Warner and Steve Smith.

During a recent interaction with PTI, Waugh said, “Australia will be the favorite I think. We know the pitches well and day-night Test is gong to be something relatively new for India. I like the way Virat Kohli is taking that challenge. If you want to be the best side in the world, you have to win away from home as much as possible. You can’t take away from India winning last time but Australia did not have the best batsmen. Marnus Labuschagne has come out of nowhere, the bowling looks much settled now. India does not have weaknesses too, so it’s potential to be a great series.”

ALSO READ: India To Play A Day-night Test Against Australia And England

India is set to play a four-match Test series in Australia in December 2020-January 2021. There has been a debate about the ambiguity regarding the World Test Championship format but Waugh said as of now it is the best possible start.  The teams locked in a two-match Test series also get 120 points while a five-match series also offers the same number of points.

Asked if it is a fair rule, Waugh replied, “We talked about having a Test Championship for a decade now and it’s exceptionally hard to make it work because the schedules are being planned five, 10 years ahead. I think they have done the best possible job.”

When asked if it is fair that India got easy points against teams like West Indies and Bangland, but Australia had to work hard during a grueling Ashes series to earn the same points, Waugh backed the current format.

Waugh said, “Let a genius come up with a solution because it’s so hard to find the right criteria. Maybe we can tweak after the first Championship and right now it’s ok to get started. I can guarantee you that the best two sides will be in the final.”

Former Australian skipper also feels that the India-Australia series will determine the finalist of the World Test championship. 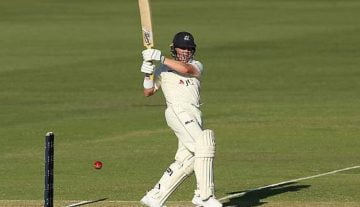 News
By CricShots - Dec 12, 2018
Marcus Harris Has All Praises For The Indian Pacers