England and New Zealand are locking horns with each other in the opening Test of the three-match series at the Lord’s Cricket Ground in London. The Kiwi skipper, Kane Williamson went on to win the toss and he decided to have a bat first. However, the Kiwis were off to a bumpy start against England in the first Test match.

New Zealand got bundled out for a meager score of 132 runs in their first innings. This wasn’t something that New Zealand was expecting and hence, England started off the first Test match on a high. However, that did not go as planned for England as they got themselves dragged into a collapse and the Kiwi bowler managed to restrict the hosts to just 141 runs in 42.5 overs.

The Kiwis got themselves into trouble again after losing four wickets for 56 runs. But Tom Blundell and Daryl Mitchell put up a brilliant display. New Zealand was at 236 runs with a loss of four wickets at the end of Day 2. England’s fast bowlers were struggling to take wickets after an early bright start on Day 3 as they were looking to provide a breakthrough.

However, New Zealand already has a 227 runs lead against England. England did quite well with the bowl to start off the first Test match on strong terms. However, their batting let them down once again. England started well with a partnership of 159 runs partnership for the 5thwicket. Stuart Broad went on to bowl a brilliant bowl against Kylie Jamieson. The New Zealander had to walk back for a duck. Even Brendon McCullum appreciated it from the stands. 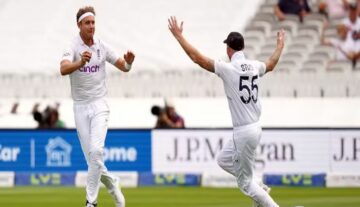 News
By SMCS - Aug 26, 2022
Stuart Broad slams the ball used on day one of second Test against South Africa