Team India suffered a 7-wicket defeat in the third and final Test of the series against South Africa, as the visitors suffered a 1-2 loss in Cape Town. India will now have to wait longer for the ‘final frontier, as they failed to capitalize after winning the first Test in Centurion. Legendary Indian cricketer, Sunil Gavaskar said that the series “has turned into a nightmare” for Virat Kohli and his men.

The Indian team was touted as favorites to win the series due to a relatively inexperienced South African side, and India was given a further boost with the absence of fast bowler Anrich Nortje. Despite the multiple setbacks, however, the Proteas managed to make a remarkable comeback to seal the three-match series.

While Indian Test captain Virat Kohli admitted that it was a “disappointing” defeat in the post-match presentation, Sunil Gavaskar said, “India’s cricket after lunch has just baffled me. One would’ve thought that you would make one last-ditch effort, bring Jasprit Bumrah and Mohammed Shami on to bowl. Because after an interval, batsmen have to reset. India’s dream of winning a series for the first time in South Africa has turned into a nightmare.”

He further added, “What can one say? Both of these victories are comprehensive for South Africa, winning by seven wickets again. India hasn’t even got close. India had a big victory in the first Test and I really thought that is going to be a template for the next two Tests as well. It didn’t happen.”

Sunil Gavaskar further said that the Indian batters were disappointed a lot and the visitors had a great chance to end a winless Test series streak against a depleted South African side.

Explaining the same, Sunil Gavaskar said, “That is something which is terrific for South Africa. But hard to understand as far as India is concerned. The way they dominated that first Test, I really thought they would be able to win the series. I was thinking in terms of 3-0 series win, because of the fragility of South African batting, the fact that Nortje wasn’t playing.. that was a huge plus once again for India.”

ALSO READ: Supersport Clarifies They Have No Control Over Hawk-Eye, No Charges Leveled At Team India

He further added, “You have two inexperienced bowlers, they had Olivier who was making a comeback. Rabada was the only threat really and I thought the Indian batting would come good. Yes, the pitch had been testing but I thought the Indian batting wouldn’t have too many worries. The application showed by South Africans in Johannesburg and here is praise-worthy. That tells the character of the team.” 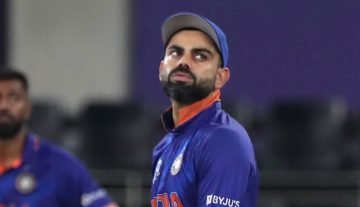 News
By CricShots - May 20, 2022
Virat Kohli Expresses The Urge To Help India Win The Asia Cup And T20 World Cup