The controversial DRS call of the South African skipper, Dean Elgar which took place on Thursday during South Africa’s third Test against India has created a lot of ruckuses. During the Proteas’ run-chase on Day 3, on-field umpire Marais Erasmus gave Elgar out LBW off the veteran Indian spinner, Ravichandran Ashwin after the ball struck the batter below the knee roll.

Although Elgar used the DRS, the skipper of the home team had already started walking. But then, replays showed that the ball was missing the stumps by a fair distance. The entire saga left the Indian players unhappy, especially skipper Virat Kohli. On the stump mic, Kohli was heard saying, “Focus on your team while they shine the ball. Not just the opposition. Trying to catch people all the time.” KL Rahul, the Indian vice-captain, and Ashwin also had a few words to say.

Meanwhile, SuperSport, the official broadcaster of the series, put across a GIF, giving an explanation on the DRS call. They suggested that bounce on the pitch at the Newlands in Cape Town was the crucial reason behind the decision. SuperSport captioned the GIF and wrote, “The bounce of the pitch – a significant factor in Dean Elgar’s successful review.”

The bounce of the pitch – a significant factor in Dean Elgar's successful review.#SAvIND pic.twitter.com/GI2rXjgjwd

Meanwhile, Virat Kohli earned backlash from Gautam Gambhir for his unruly behavior on the field. Gambhir termed Kohli ‘immature’ after the India captain expressed his displeasure on the stump mic. During a chat on Star Sports, Gambhir said, “Kohli is very immature. It’s worst for an Indian captain to say like this in stumps. By doing this you will never be an idol to youngsters.”

Lungi Ngidi, who’s a part of the ongoing Test series, said that Kohli’s reaction was a sign of India being under immense pressure. Ngidi said, “Reactions like that show a bit of frustration and sometimes teams capitalize on that. You never want to show so much emotion, but we could see emotions were high. That tells us they are feeling a little bit of pressure.”

At the close of play on Day three, South Africa needed 111 runs to win the Test with eight wickets in hand. Elgar got out to Jasprit Bumrah after India used the DRS to good effect. 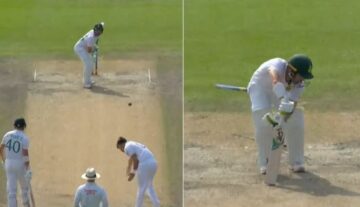