During a chat on JioCinema’s IPL Player Auction expert discussion, Suresh Raina said, “I played with Mujtaba (Yousuf) in the Syed Mushtaq Ali. As a left-arm fast bowler, he has good action and good control of his swing. Then you have Samarth Vyas from Saurashtra who has scored at a strike rate of over 150 and was among the top five run-getters in the Syed Mushtaq Ali Trophy and just won the Vijay Hazare Trophy. He is a very good future prospect.”

Allah Mohammad Ghazanfar, a 15-year-old Afghan right-arm off-spinner, has registered himself for the IPL auction on December 23 in Kochi. Ghazanfar, the youngest player in the IPL auction, had previously registered for the Big Bash League auction but did not find any takers.

Ghazanfar is 6ft 2 inches tall and from the Zurmat district of Paktia province. Given his height, he started his career as a pacer but gradually evolved into a spinner under the watchful eye of former Afghanistan captain Dawlat Ahmadzai.

Talking about the youngster, Suresh Raina said, “But watch out for Allah Mohammad. At 6ft 2 inches and 15 years old, he is an off-spinner with a big heart. A lot of talent is coming from Afghanistan.” 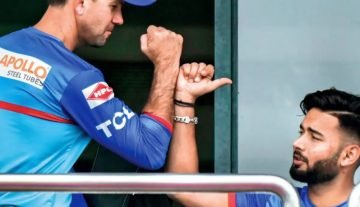 IPL 2023
By CricShots - Jan 20, 2023
Ricky Ponting Reckons Rishabh Pant Should Be In DC’s Dugout Despite Being Unfit