Mumbai Indians (MI) lifted their record 5th IPL title after defeating Delhi Capitals (DC) by 5 wickets at the Dubai International Cricket Stadium. It was a no-show run chase for the defending champions as Delhi had failed to post a decent total on the board owing to the heroics of Mumbai’s veteran pacers, Trent Boult and Nathan Coulter-Nile.

Winning the toss, DC skipper Shreyas Iyer decided to bat first, but the move backfired as Boult again weaved his magic in the powerplay by sending two batsmen namely Marcus Stoinis and Ajinkya Rahane back to the pavilion in his first two overs itself. Though Shreyas Iyer and Rishab Pant managed to stitch a partnership in the middle, the team could only manage to post a target of 156 on the board.

Mumbai got off to a flying start thanks to their opening duo of Rohit Sharma and Quinton de Kock. They added 45 runs in the first 4 overs, however, the latter got out to Stoinis in the 5th over only to bring Suryakumar Yadav in. The two started off well but a mix-up by Rohit in the middle of the 11th over could have helped DC in getting ahead in the game.

On the fifth ball of the 11th over, Rohit set off for a single straightaway after punching Ashwin’s delivery towards extra-cover. Suryakumar was keeping a close watch on the ball and hence denied the run. However, Rohit had almost reached the bowler’s end and Praveen Dubey threw the ball towards the Striker’s end to effect the dismissal.

Understanding the gravity of the wicket of Rohit, Suryakumar decided to sacrifice his wicket so that the in-form Sharma can take the team home. The selfless nature of Suryakumar Yadav won the hearts of the audience and his teammates and the batter was highly appreciated for the same.

Lauding Suryakumar Yadav for his selflessness, the official Instagram handle of Mumbai Indians had hailed him as Selfless Surya. Reacting to this, the 30-year-old reposted the story on his Instagram handle and wrote, “Can sacrifice my wicket for him any day”. 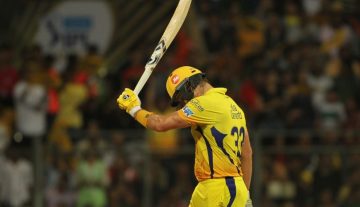