India and Pakistan will lock horns in a high-voltage clash on October 24 in Dubai to kick off their T20 World Cup 2021 campaign. The fever has started taking over the fans across the border and commercials are doing rounds on the internet.

Both countries produce commercials to mock each other. India’s ‘Mauka Mauka’ commercial stole the limelight when it was first aired during the World Cup 2015. The ad took a dig at Pakistan’s losing streak against India in the World Cups.

A similar commercial was again made for the upcoming T20 World Cup 2021. The same actor was seen going to a television story to purchase one. The shop owner was an Indian and gifted his Pakistani friend another TV set keeping Pakistan fans’ habit of breaking TVs after losing against India.

An old commercial made in Pakistan is doing rounds on social media these days. They tried to take a dig on Indian fans.

The ad shows Indian fans holding firecrackers in their hand as they were waiting for India to win against Pakistan. The background noise of match commentary suggested that Pakistan won a thriller game on the last ball and sent Indian fans in tears.

Being disheartened by the defeat, Indian fans were shellshocked as their doorbell rings. They open the door to find several Pakistan fans waiting for them. They grabbed the firecrackers from their hands and handed them a box of tissues. One fan takes a dig at them by saying “No issues le lo tissues”.

The match between India and Pakistan will be played in Dubai on October 24. Pakistan team is in good form and can spring a surprise but the Indian team is also well-oiled and will tackle every question thrown in their direction. 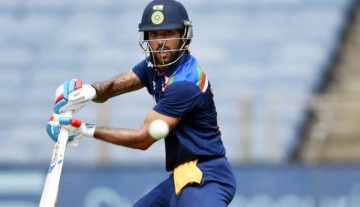 Article
By CricShots - May 22, 2022
Shikhar Dhawan Wasn’t Unhappy After Being Snubbed From T20 WC Squad