Team India is reportedly set to don a new jersey when they will be locking horns with Australia in the upcoming ODI and the T20I series down under. Virat Kohli & his men have flown to Australia for three ODIs, three T20Is, and a four-match Test series. The much-anticipated series between the cricket giants will kickstart with the ODI series on November 27 in Sydney.

It will be followed by the T20I series which is scheduled to take place between December 4 to 8. The four-match Test series, on the other hand, will be commencing on December 17 with the day-night Test in Adelaide. It will be the first-day night Test match between the two rival countries. The Indian team departed for Australia from Dubai on Wednesday, the BCCI confirmed.

The Indian cricketers will be undergoing quarantine before starting their commencing practice for the series. According to reports, Team India will be staying in the outskirts of Sydney. Some of the reports also suggested that the booking for Team India has been done at the Pulman Hotel in the Sydney Olympic Park area. The upcoming series will also mark the resumption of international cricket for Team India.

ALSO READ: Suryakumar Yadav Has No Regret In Sacrificing His Wicket For Rohit

Just like India, Australia will also wear a new jersey for the T20 series, Cricket Australia confirmed on Wednesday. Aaron Finch & his men will also be wearing specially-designed Indigenous shirts in the upcoming T20I series, a move aimed at recognizing and encouraging the Indigenous Australians’ role in the sport. 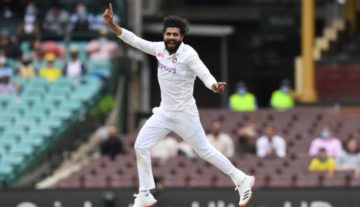