South Africa limited-overs skipper, Temba Bavuma gave his thoughts about young batter Dewald Brevis who witnessed a phenomenal outing in the recent Indian Premier League (IPL) 2022 for the Mumbai Indians (MI). However, he wasn’t selected for South Africa’s T20I squad for the upcoming five-match series against India which will be played in India. Brevis came off an excellent U19 World Cup in West Indies for the Proteas where he was the highest run-scorer for his team and in the tournament as well.

Dewald Breavis had amassed 606 runs in 6 games at an average of 84.33 with three half-centuries and two centuries to his name. In February 2022, Mumbai Indians roped in Brevis during the mega auction. He made an impressive outing for MI playing 7 matches for MI scoring 161 runs with a best of 49 at a strike rate of 142.28, hitting 14 fours and 11 sixes, justifying his moniker of ‘Baby AB’.

ALSO READ: Venkatesh Iyer opens up on the comparisons with Hardik Pandya

Temba Bavuma was questioned about Dewald Brevis’ absence from the Proteas squad for the T20Is in India on the eve of the team’s departure to India. Bavuma explained that South Africa did not want to rush the 19-year-old batting wonder into international cricket without preparation and hoped to see him perform well in the domestic set-up this summer.

Describing the same, Temba Bavuma said, “In all fairness to him, he hasn’t played a first-class game. In terms of expectation but also allowing the boy to grow within his game, it would be fair to allow him to play a couple of first-class games where he can really get an understanding of his game.”

He further added, “It will be a lot of pressure to throw him into the international set up and expect him to make plays. He will be treated like any other exciting young prospect that comes onto the scene. He will be looked after as well as he can. He should be given time and the space to hone his game within the system and ease into the international side of things.”

Dewald Brevis has been contracted to the Titans based out of Centurion for the next two seasons. 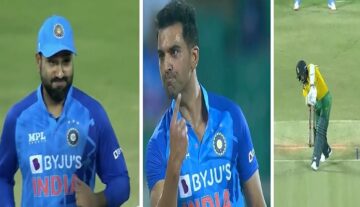