The summer of 2019 was in England was nothing short of a dream for the all-rounder, Ben Stokes as first first he helped his team to win the 2019 ICC Cricket World Cup title in a pulsating final against New Zealand at Lord’s, then he helped the England to retain the Ashes title against Australia. He played one of the great knocks of the World Cup as 44 years of pain were eliminated.

England suffered a demoaralzisng loss owing to brilliant batting from Steve Smith in Edgbaston and they managed to hold on to a draw in Lord’s. Howver, Smith missed the thord Test due to cincussion as he suffered a ferocious bouncer from Jofra Archer. The match began disastrously for England, but Ben Stokes came out all gusn blazing in the second innings and changed the entire course of the match in stunning fashion.

Joe Root and Joe Denly began steadily with fifties but the hosts were reeling at 177/4, the game kept on slipping away from England. That was when Stokes decided to take matters into his own hands. The left-hander shared a partnership of 86 with Jonny Bairstow as England reached closer to the target. However, after Bairstow’s dismissal for 36 witnessed a sudden collapse as they lost four wickets for 41 runs. With only one wicket remaining, Stokes decided to go into beast mode.

Who else is waiting for Stokes to unleash this shot in the IPL? 😄#OnThisDay, 2019pic.twitter.com/1V5hoWV66z

Stokes unfurled reverse sweeps, picked his moments and smashed sixes at will. He rotated the strike with absolute precision and notched up a brilliant hundred. England were nearing the target but with two runs needed, they alsmots suffered a disaster. Ben Stokes hit a ball to the fielder and Jack Leach, the non-striker, ran his heart out for a single. He was sent back halfway down the pitch but in an incredible act of self-destruction, Nathan Lyon missed the golden chance of a running him out.

In the next ball, Stokes missed a slog sweep and Australia appealed for an LBW. The umpire did not give it out. Australia had no reviews left and replays indicated that the ball was crashing on to the stumps.

Next ball, Ben Stokes crunched Pat Cummins to the boundary and England registered a historic win. It was their highest successful chase in Test history and it was the first time that a team had won a Test after being bowled out for under 70 in 131 years. 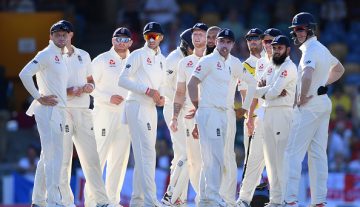