All-rounder Ellyse Perry stated that the Women’s Indian Premier League (WIPL) is going to have a huge impact on women’s cricket. The WIPL is yet to begin although talks for the same are underway. The Women’s T20 Challenge began in 2018 and has witnessed three editions so far, involving Velocity, Trailblazers and Supernovas as the three teams as well.

However, Perry was on top of her game on Saturday, where she scored an unbeaten 42-ball 72 in the fourth Women’s T20I against Harmanpreet Kaur-led India at the Brabourne Stadium in Mumbai. On the back of her knock, Australia managed to post their highest score against India in Women’s T20Is and eventually registered a seven-run win.

Perry also added a 94-run stand with Ashleigh Gardner, who won the Player of the Match award for scoring 42 off 27 and finishing with figures of 4-0-20-2 as well. Ellyse Perry also praised Gardner and also applauded Grace Harris, who chipped in with an unbeaten 12-ball 27 on December 17 as well.

“The game’s continuing to evolve and grow and you have to go with it. I’m really enjoying the opportunity to bat with this group. Grace was absolutely amazing tonight, so was Ash Gardner,” Perry was quoted as saying in the post-match presentation ceremony. “Never seen the crowd pull out their mobiles and turn on the flashlights and support a team like they did in the Indian innings. For me that’s just amazing. The IPL is going to be amazing.”

“Tremendously. Next frontier for the women’s game. We’ve seen what the WBBL has done for women’s cricket in Australia, the Hundred in England and the next step is the women’s IPL in what is the spiritual home of cricket,” Ellyse Perry concluded. 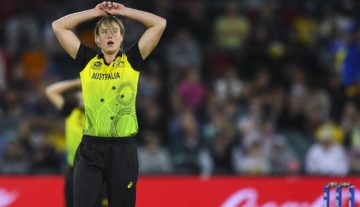