For all the cricket fans out there, mention the world cup heartbreak and everyone will surely mention the Proteas heartbreak in the semifinal of the Cricket World Cup in Australia. South Africa pacer Dale Steyn’s reaction and AB De Villiers crying face after the end of the semi-finals is something that will make every cricket heart go weak and feel those emotions in the gut. Every cricket player dreams of hitting a last-ball winning six and helping his country sail through at the biggest stage possible and New Zealand batsman Grant Elliot has ticked that box right off as he hit a six off Dale Steyn to propel New Zealand to their first World Cup final On this day, Five years ago.

Speaking about what was going through his mind in the last over as the equation read 5 runs off two balls, Elliot answered, ” The first thing that went through my head is “don’t f%^& this up!” It’s amazing how the fear of failure and negative thoughts can enter your mind. Then its a matter of “Fight, Flight or Freeze”. I have always fought my way through things in my life. I didn’t want to be remembered as the guy who couldn’t get the team over the line in a semifinal. These moments are amazing opportunities and we have to grab them with both hands. Grit my teeth, focus and breathe! Luckily for me, it went my way. ”

Asked about the national wide fellowship of rugby and New Zealand’s conversion into a cricket-loving country during the World Cup and the transformation of the same helping the Blackcaps perform well in the tournament, Elliot answered, “The support was second to none in a country which is usually rugby-focussed. I experienced the rugby World Cup in New Zealand in 2011. And with rugby, there is almost an expectancy to win and we are fortunate to have a world-class and dominant team.”

Elliot continued with, ” The tournament started and gathered momentum after we beat Australia at home in a low-scoring game which saw Kane Williamson hit Pat Cummins for a six over mid-on. This game formed the catalyst of our home support believing that the Black Caps could win the tournament. The support from that moment on absolutely spurred the team to new heights. It was a very special and memorable time for all players and support staff involved.”

The Former NZ all-rounder was also questioned about the surreal feeling he had after winnings those runs.  Looking back on those memories, the NZ star was asked to share his current feelings on the same.

Elliot said, ” Our team was all about the collective and not the individual. There were so many special performances which helped us get to the final. Tim Southee’s seven-for, Martin Guptill’s 200, Dan Vettori’s leadership and catch against the West Indies, Brendon McCullum’s amazing cameos at the top, Kane Williamson’s six against Australia, Trent Boult’s whole tournament, Adam Milne’s pace, Taylor’s experience ….. the list goes on. We were a true team and everyone stepped up when we needed to. We didn’t doubt that each individual was going to be accountable and do whatever they could for the team.”

Bringing the New Zealander back for the remising happy performances of last World Cup, the NZ batsman was asked about the feelings of the NZ  squad who suffered heartbreak in the finals of ICC World Cup 2019 at Lords against England after fighting so hard and losing on even equalling up the super-over score.

Grant obliged and replied, ” It was heralded as the best ODI game the world has ever seen. Quite frankly I can’t watch that game again! It is just too painful to watch NZ lose. Plenty of mistakes made. The runs were given to England as six instead of five with the deflection and then, the super over. It is just so hard to swallow. ”

The New batsman was also asked for comment on the changes he has observed in New Zealand in the last 5 years, after his heroic last-ball six against Styen in the semi-final of WC 2015 to which replied, ” New Zealand does pride itself in being a team that is humble and selfless. I don’t think too much has changed. We have had a very successful team and the 3-0 in ODIs against India and then 2-0 in Test victories show what a world-class team and squad we have. Working tirelessly at your passion is the only way you succeed. We have players like Kane, Ross, Trent, and Tim to lead the way in that regard.” 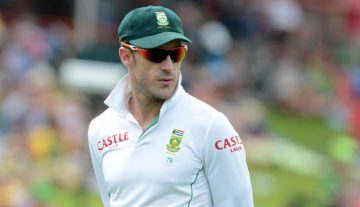 News
By Sandy - Jul 12, 2018
Faf du Plessis is hopeful on the South African pacers for the Sri Lanka series