Tweeting about the same, ICC wrote: “Front foot no-ball technology to be used in ICC World Test Championship series featuring England and Pakistan, with the support of both teams. Performance of the technology in these Tests will be reviewed before any decisions taken on its future use in Test cricket.”

ALSO READ: Ishant Sharma Eyeing To Make A Comeback In ODIs For India

England and Pakistan will be locking horns with each other for a three-match Test series with the first Test that had started on Wednesday at Manchester. The series will be a part of the World Test Championship.

In July, it was confirmed that TV umpires will be taking the final call on deciding the front-foot no-ball calls exclusively in the inaugural ICC World Cup Super League as well. The ODI Super League commenced with the three-match ODI series between Ireland and England.

ia and West Indies. During the India-Windies series, the technology was used on a trial basis, but the global body was satisfied with the outcomes and as a result, third-umpires called front-foot no-balls in this year’s Women’s T20 World Cup as well.

Announcing the launch of the ODI super league, in a statement, ICC said, “Introduced to bring context to One-Day International (ODI) cricket, the Super League will determine qualification for the ICC Men’s Cricket World Cup 2023 with the top seven teams automatically booking their spot at the event in India.” 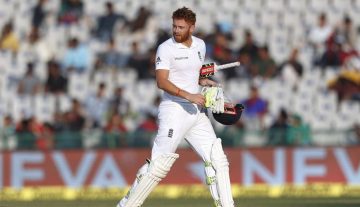 Article
By CricShots - Aug 21, 2018
Eng vs Ind: Jonny Bairstow Expresses The Extent Of His Injury