Cricket is a team game and batting partners are supposed to help each other during their stay at the crease. However, Ash Gardner made headlines by failing to do that when she advised Ellyse Perry not to review LBW despite the ball sliding down the leg as well. However, the incident happened during the game between Sydney Sixers and Sydney Thunder.

The sixers posted a decent total after 20 overs in the 51st match of the WBBL 2022. After being reduced 16/2, Ellyse Perry and Ash Gardner added a partnership of 59 runs and steadied the ship. Both the batters were timing the ball well, but Ellyse Perry got out courtesy of a judgmental error from Ash Gardner who was at the other end as well.

Meanwhile, the incident happened in the 12th over of the innings when Belinda Vakarewa was bowling the first ball to Ellyse Perry. She bowled a full-length delivery going down the leg side which struck the batters’ pads. Vakarewa appealed immediately and the umpire raised his finger. However, Perry asked Gardner at the non-striker’s end if she should take DRS. Even, though both the batters were involved in a long discussion, later Perry walked back as Gardner suggested not to take. However, the ball tracking technology later showed that the delivery was going down the leg and the Sixers missed an opportunity to take a review that would have saved Ellyse Perry as well.

Twitter noticed that and criticized Ash Gardner for not giving the right advice. Here is how they reacted:

Omg that was way down leg #WBBL08

That’s not even close. Who is worse ? The umpire who gave it out or Gardner #WBBL08 https://t.co/3IRXnTgdE4

Couldn't believe that wasn't reviewed. Just watching it live I thought it was clearly going down legside. 🤷‍♂️🤦‍♂️ #WBBL08

Gardner needs to makeup for her stupidity to not let perry review . Brainless fuck #WBBL08

The Sixers could have reviewed and saved Perry's wicket 😬 #WBBL08 pic.twitter.com/2lCbDlCwCQ 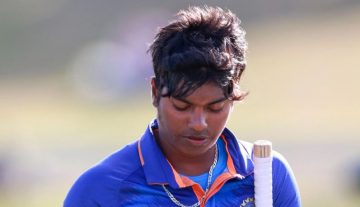