Currently, the Indian team is locking horns with the West Indies at the MA Chidambaram Stadium in Chennai. The West Indies skipper, Kieron Pollard decided to bowl first after winning the toss. However, a lot of confusion happened in the 48th over as umpire called for a run-out after the replay was shown on TV which suggested that Ravindra Jadeja was out as the umpire had earlier declined the appel from the West Indies player.

Meanwhile, India lost the lost their ever-reliable top-3 of Virat Kohli, Rohit Sharma, and KL Rahul before the 20-over mark. The Windies fast bowler, Sheldon Cottrell removed Rahul and Kohli for a single-digit score in the seventh over. While Rahul, who opened for Indian in place of an injured Shikhar Dhawan, departed for just six runs, Kohli was dismissed for four runs.

Rohit then stitched a fifty-run partnership with Shreyas Iyer before Alazrri Joseph had him caught at midwicket. Sharma departed for 36 as India stood for 80 for three in 18.1 overs. Rishabh Pant and Shreyas Iyer then batted cautiously against Windies attack, adding 114 runs for the 4th wicket as the latter got out to Joseph in the  37th over after scoring 70 off 88 balls.

Pant also got out in the 40th over of Pollard after scoring 71 off just 69 balls. After his dismissal, Jadeja and Kedar Jadhav added 59 runs for the 6th wicket, as the latter was dismissed by Keemo Paul in the 48th over. However, the drama was created after the dismissal of Jadeja in the same over.

On the 4th ball of the over, Jadeja jammed the ball to send it to midwicket and ran for a quick single taken, he was earlier declared safe by the umpire despite the fielder running in and effecting a direct hit at the non-striker’s end. However, the TV replays showed Jadeja was out of the crease and soon after that on-field umpire called for the third umpire and eventually, Jadeja was ruled out.

It was a bizarre sequence of events as the questions are raised that is it justified that third umpire can be called hat late in the proceedings. However, according to the current rules, Jadeja was out. Here is how Twitterati reacted to the same:

Ravindra jadeja should have been go out without waiting umpire' decision . It is not a question that indies caption discuss out sider his analytic . Virat Kohli rose this questions why Pollard took help with his analytic.

We *think* he was angry at Jadeja for his slack running – if looks could kill, India wouldn’t have any cricketers left.#INDvWI🏏🇮🇳🌴 https://t.co/qVmHuNrpOu

Appeal was done by roston ws denied by umpire.u cant go upstairs once u deny it.analyst told pollard its out he came to pressurize umpire, umpire shud have warned him n sent him bk rather than going upstairs.its like accepting bride n den referring to 3rd umpire else go to hell

Fucking umpire is sooo bloody dumb ! Kick him out of the bloody field! Already has 4 pairs of eyes and yet still blind ! 🤬 @ICC @BCCI #INDvWI #shaungeorge #ODI

Ravindra jadeja should have been go out without waiting umpire' decision . It is not a question that indies caption discuss out sider his analytic . Virat Kohli rose this questions why Pollard took help with his analytic.

The umpire before and after seeing the replay pic.twitter.com/L7sIe3M8z2

@ICC @BCCI Just can't believe what happened, after so many years of professional cricket we still have these mistakes being made, Umpire Shaun George today in the first ODI in #INDvsWI, reviewed a run out after W-indies appeal after a while, we need strong rules @StarSportsIndia

This is not fair by #umpire and @KieronPollard55 .
If umpire had not given out then why #pollard and his team did not appeal?
After seeing on big screen @windiescricket started appealing. This is not cricket ethic.
Umpire has to be alert on the field. @imjadeja #INDvWI #WIvIND 🏏

@KieronPollard55 problem was, you didn't even show any Intrest in Appealing for Run out, and when it was shown on big screen, you just came Crying to the Umpire to review it?
Its unethical to get help from outside source!@ICC @BCCI @windiescricket @imVkohli 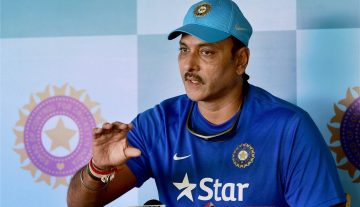