The fiery English pacer, Jofra Archer has made a name for himself as one of the quickest bowlers across the globe. In such a short cricketing career, he has achieved a lot as a player. However, he has often been seen a lot more active on social media due to which sometimes he has to face the heat of the fans. In his latest social media activity, Archer has shared a GIF clip of Varun Dhawan that has received a hilarious reaction of the netizens.

Jofra Archer made his international debut and went onto play a total of 7 Tests, 14 ODIs and 1 T20I in which he has scalped 55 wickets across all the formats. He was also the leading wicket-taker for England in World Cup 2019 as he scalped a total of 20 wickets in 11 matches. Later on, he proved his mettle in Ashes 2019 in which he took 22 wickets in four matches and ended up being the 2nd leading wicket-taker after Stuart Broad in the prestigious tournament.

At the moment, Archer is in England away from cricket as all the tournaments have been abandoned or postponed due to the outbreak of Coronavirus. Moreover, now he has got an ample amount of time to recover from the stress fracture in his elbow. As per the reports, it might take at least three months for him to recover from the same. Moreover, he has been ruled out from the upcoming edition of the Indian Premier League (IPL). So, with nothing much to do on the field and COVID-19 threats, he is spending much of his time being active on social media.

Jofra Archer took to his Twitter handle and shared a clip of Bollywood star Varun Dhawan in a reply to a Jamaican model. He might be unaware of the fact that the GIF that he used is a Bollywood actor. Soon, this reply from England pacer came under the radar of the netizens that came with some hilarious replies and questions.

Here is how fans reacted to Jofra Archer’s tweet:

Hey Jofra tnx for this GIF..😍 you know who is this guy…@Varun_dvn

Do you know the actor's name who is in GIF ?

Hey jofra you know who's he……?
He's Bollywood actor @Varun_dvn 🤩

Lol, what are you trying to imply with this gif? 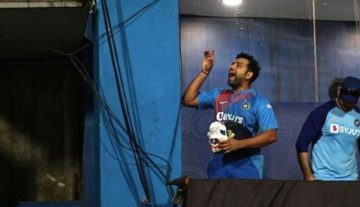 Videos
By CricShots - Dec 12, 2019
WATCH – Rohit Sharma’s Geture For His Daughter Wins A Lot Of Hearts