Team India is yet to lose a match in the ICC World Test Championship as they defeated Bangladesh by an innings and 130 runs in Indore. The result of the match was out of the question after the hosts amassed more than 100 runs on Day 2 with the help of Mayank Agarwal smashing a scintillating double century. Bangladesh couldn’t manage to handle the fiery bowling of the Indian placers in the second innings as well as were bundled out for 213 runs.

Under the leadership of Virat Kohli, India declared their first innings on the overnight score itself which read 493/6. Ravindra Jadeja remained unbeaten 60 while Umesh Yadav enjoyed his 10-ball stint to score 25 runs. India took a humongous lead of 343 runs in the first innings over Bangladesh and invited them to bat on the third morning.

It didn’t take long for the hosts to take the first wicket as both Umesh Yadav and Ishant Sharma breached the defense of Bangladesh openers Imrul Kayes and Shadman Islam respectively in the first 10 overs itself quite similar to the first innings. Mohammed Shami came then and sent back the opposition skipper Mominul Haque and Mohammad Mithun to leave the visitors reeling at 44/4.

The veteran duo of Mahmudullah and Mushfiqur Rahim then defied India a wicket for close to an hour. But the former edged one to Rohit Sharma at slips and once again it was Shami was the bowler. However, Rahim showed immense composure and though he was dropped early in his innings, played a calculated knock to hold one end up.

Liton Das and Mehidy Hasan managed to surpass the 30-runs mark and played some attractive shots. They stitched 63 and 59-run partnerships respectively for the sixth and seventh wicket with Rahim. But it was only a matter of time when the Indian bowlers would strike back. Ravichandran Ashwin also joined the party after the first few and he struck to dismiss Das while Umesh castled Mehidy.

Meanwhile, Rahim went on to score his half-century to continue his good record in Tests against India. Soon he was dismissed attempting a big shot off Ashwin and it didn’t take much time for the home team to wrap things up. Shami shined as usual in the second innings with four wickets to his name while Ashwin was back amongst the wickets with the figures of 3/42

An innings win! @imVkohli breaks another record as captain! Most innings wins as Test captain is a great achievement. What a fantastic team effort by #TeamIndia. #INDvBAN

It is no longer a surprise that @MdShami11 bowls outstandingly in second innings, more so in Indian conditions. What is surprising to me is that a Test match finish inside 3 day and spinners are not able to take a total of five wicket! #Shami #INDvBAN pic.twitter.com/y6By14K6Ht

Virat must be fast becoming India’s best ever skipper … #INDvBAN

India finishing red ball Tests in 3-4 days against South Africa and Bangladesh. How many days with pink ball? #IndvBan

Delightful interview of India's pacers at the the end of #INDvBAN.

"They don't treat me like a senior at all" – a smiling Ishant Sharma with Mohammed Shami and Umesh Yadav.

His only concession to 'seniority' is: "The body's feeling a little old after bowling so many overs."

India's WTC draw is a masterpiece let's be honest https://t.co/YjnBVm4JJ7

Banter between Ishant and Shami!

This is the new culture!

Such random freak stuff amongst the bowlers, Ishant well and truly on song. With that great voice. #IndvBan

Most wins by an innings among Indian captains: 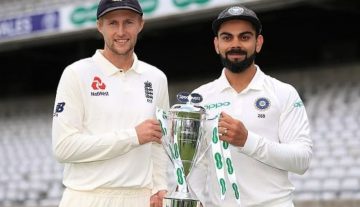