Umpiring has often been considered one of the toughest jobs in cricket as an umpire has to make judgments based on real-time play, which leaves very little room for error. However, the Women’s Asia Cup witnessed a moment where the umpire failed to notice the batter getting bowled despite the batter beginning to walk off. The Women’s Asia Cup got underway on October 1 and India has been a dominant side so far in the tournament.

India women registered a dominating win over Malaysia in a rain-affected game on Tuesday with a margin of 30 runs. Malaysia was reduced to 16/2 before rain interrupted the game and they suffered a defeat by the DLS method. However, the dismissal of Wan Julia was one of the talking points of the game as it involved a bizarre sequence of events.

Rajeshwari Gaikwad was bowling the fourth over of the innings and Julia was facing the first delivery of the over. Gaikwad bowled a delivery outside off to the batter and she tried to play it in the third-man area. However, she failed in the attempt and the ball hit stumps after deflecting off her inside edge.

No one except for the wicketkeeper noticed the batter getting clean bowled initially including the leg umpire. Surprisingly, she went upstairs after the appeal from the Indian team as she missed spotting the stumps getting shattered.

ALSO READ: Jasprit Bumrah Officially Gets Ruled Out Of The T20 World Cup 2022

At the same instance, the batter was walking back to the pavilion by herself and the non-striker came running from the other end to take a single. Both the batters ended up on one end eventually as the Indian team kept appealing. The umpires met in the middle of the pitch to discuss the delivery and since they were unsure, it had become quite dark as well. They decided to refer it to the third umpire who, after seeing the replays, adjudged that Julia had been bowled and came up with a prompt decision. 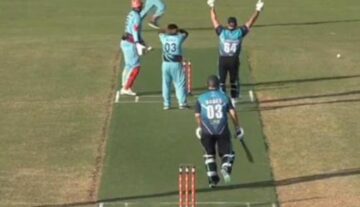 Twitter Reaction
By CricShots - Nov 9, 2022
A Batter Manages To Survive With A ‘Lucky’ Dismissal