In world cricket, there have often been seen batsmen getting dismissed in weird possible ways and something similar took place during the series-decider between India and Australia at the Feroz Shah Kotla in Delhi as the Australian pacer, Pat Cummins got dismissed in an unusual way off the bowling of Bhuvneshwar Kumar in the penultimate over of the innings.

Earlier in the game, after winning the toss, the Australian skipper, Aaron Finch decided to bat first and even the Indian skipper, Virat Kohli wanted to do the same. However, now the hosts need 273 runs to seal the series. India made some surprising changes in the squad as KL Rahul and Yuzvendra Chahal were replied by Jadeja and Mohammed Shami. On the other hand, Australia replaced Shaun Marsh and Jason Behrendroff with Marcus Stoinis and Nathan Lyon.

Australia had a decent start to their innings as they were standing at 76 without loss after the 14-over mark. However, after Finch’s dismissal, Peter Handscomb (52) and Usman Khawaja (100) again started to build a partnership which was broken in the 33rd over, but only after latter scoring his 2nd ODI century.

The match-winner of the Mohali ODI was dismissed by none other than Kuldeep Yadav in the 42 over of the game. After that dismissal, the Aussies were badly struggling as at one point with the tally of 230/7 in the 46 overs but in the next two over of Bhuvneshwar Kumar and Jasprit Bumrah, Jhye Richardson (29) and Pat Cummins (15) managed to score 30 runs with some luck on their side.

Then came the penultimate over of the innings, in which Bhuvneshwar Kumar dismissed Cummins. Bhuvi bowled right into the blockhole and Cummins squeezed it back to the bowler. Bhuvneshwar decided to appeal for a catch as he thought the ball bounced from Cummins’ pad, umpires converge and then decided to go upstairs with not out as a soft signal. Replays confirm that Cummins has smashed the ball onto the pad and Bhuvi has taken a comfortable catch. Pat Cummins started walking upon seeing replays on the big screen. 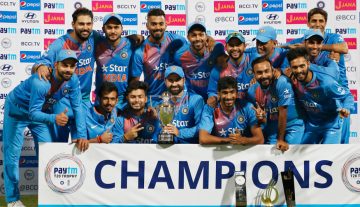