News
Venkatesh Iyer Stretchered Off the Ground After Suffering A Blow On His Neck
By CricShots - Sep 16, 2022 3:35 pm
Views 2.7K

In an unfortunate turn of events, the Indian all-rounder, Venkatesh Iyer left the field in an ambulance after suffering a severe looking injury had to leave the field injured after being hit on the head by a throw from bowler Chintan Gaja during the ongoing Duleep Trophy clash. Iyer is a part of the Central Zone squad for the ongoing match against West Zone in Coimbatore. Talking about the game, West Zone got bundled out for a meager score of all out for just 257 after being asked to bat first.

Prithvi Shaw and Rahul Tripathi scored half-centuries for West Zone while Kumar Kartikeya picked up 5 wickets for Central Zone. In reply to West Zone’s innings, Central Zone witnessed a poor start and was reeling at 77 for 5 at lunch on day 2. The second day of the match witnessed an ugly incident that took place in the second session of the day.

According to journalist S Dipak Ragav, Chintan Gaja’s direct throw hit Venkatesh Iyer on his head and the latter had to retire hurt immediately. According to another report, the batsman was hit right below the helmet on his neck. It all began when Venkatesh Iyer smashed Gaja for a six.

The left-handed all-rounder came down the track and smashed Gaja for a maximum over long-off and the bowler was not very happy about it. And while it is quite natural for a pacer to feel disappointed after being hit for a six in that manner, Gaja ended up expressing his disappointment in an unacceptable manner.

On the very next delivery when Venkatesh Iyer was defending a ball towards Gaja, the bowler picked it up and threw the ball at the batsman. The ball went on to hit Venkatesh Iyer on his head and soon he was seen lying on the floor. Iyer could not continue his batting after the incident as he received treatment. In no time, the ambulance came out on the field too but the batsman managed to walk off the field by himself.

Poor stuff from chintan gaja. threw the ball back at venkatesh iyer and hit the batter straight on the head.

Unpleasant scene here. Venkatesh Iyer has been hit on the shoulder as Gaja throws the ball defended ball back at the batter. Venkatesh is down on the ground in pain and the ambulance arrives. #DuleepTrophy pic.twitter.com/TCvWbdgXFp 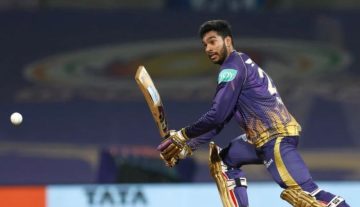 News
By SMCS - May 31, 2022
Venkatesh Iyer oens up on the comparisons with Hardik Pandya