Legendary Indian cricketer, Sachin Tendulkar welcomed a “new rapper in town” after his friend, Vinod Kambli bossed the challenge thrown down at him by the ‘Master Blaster’. Last month, Sachin challenged Kambli to perform the rap from his song ‘Cricket Wali Beat’ and gave him a week to perfect and the latter gladly accepted it.

Although Kambi took a little over the given time, he tweeted a video of him completing the challenge as he was seen performing the song in a studio on February 03. Tendulkar on Wednesday retweeted Kambli’s video, saying that he was impressed by the performance.

That was really impressive, @vinodkambli349!
Looks like there's a new rapper in town. 😎 https://t.co/kPT6kntHuC

Tendulkar had performed the song along with singer Sonu Nigam in 2017. It was dedicated to his fellow cricketers who had played in World Cups. He had challenged Kambli to perform the song on January 21 via a tweet in which he wrote: “Mr. Kambli, I challenge you to do the rap of my song #CricketWaliBeat! You have 1 week”.

He had also said, “I’m going to give him a week’s time. So, by the 28th (of January), if he doesn’t know how to sing that song, then he owes me something”.

Sachin and Kambli share a very strong friendship as they were trained by the same coach, played for the same school team and then played together for India. The two had burst got huge limelight when they had put up a historic partnership of 664 runs with individual scores of 326* (Tendulkar) and 349* (Kambli) for Shardashram Vidyamandir against St Xavier’s High School in the Haris Shield semi-final in February 1988. 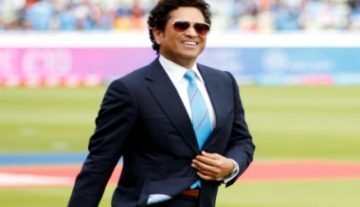