The captain of the Royal Challengers Bangalore (RCB), Virat Kohli feels that his team sticks together in losses and in wins.  They started their IPL 2020 campaign with a convincing win against Sunrirsers Hyderabad (SRH) followed by a gigantic loss of 97 runs to KL Rahul’s Kings XI Punjab.

Talking about the loss, Kohli said, “You don’t want to beat yourself down too much. You have prepared well, practiced well, so trust the process and as a team, you just have a stick together. You take a win together and take a loss together and move ahead and look forward to the next game.”

While the KXIP skipper was on a hitting spree, Rahul was dropped twice by Virat Kohli before he went on to score a flamboyant century (132* off 69 balls).

Virat Kohli acknowledged, “A couple of important chances against a set-batter, 35-40 runs against a set batter makes a big difference. I know these things look small, but I would like to take my example tonight and make all of us understand and myself how important these things can be when we’re looking to push forward as a team. It doesn’t help when we drop a guy who is set, twice in 2 overs.”

He further added, “We were looking set to restrict them at around 175-180. Obviously I dropped a couple of chances. You understand how important these things are in T20 cricket, the game drifts away from you very quickly. We lost a bit of momentum there and left ourself with a bit too much to chase when we should have probably been chasing under 180. “ 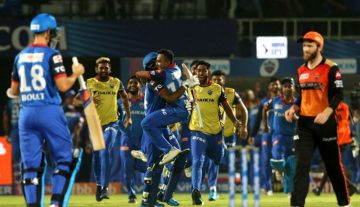