The Indian skipper, Virat Kohli, and his men had a memorable last year and now it seems that they have carried the same form into the new year 2020. While the first T20I between India and Sri Lanka in Guwahati was washed-out due to rain, the second T20I witnessed another dominance of the men in blue as Kohli registered a world record.

In Indore, India outplayed the ISlanders the visiting Sri Lankans by seven wickets with Virat Kohli scoring a 17-ball 30* in the chase. The knock not only helped him become the leading run-scorers in T20Is surpassing his deputy Rohit Sharma and it also helped him become the fastest to reach 1,000 T20I runs as captain.

Virat now has 1,006 runs as captain in T20Is and overall, he tops the charts with 2,663 runs. He beat the record of South Africa’s Faf du Plessis, who had reached the landmark in 31 innings. The Indian skipper got there in 30 innings, thereby breaking yet another record in world cricket. After MS Dhoni, Kohli is the second Indian skipper to reach the 1,000-run mark as captain. Dhoni had taken 57 innings to reach the milestone.

On Tuesday, the Indian team had another comfortable outing and completely outplayed the visitors to take an unassailable 1-0 lead in the three-match T20I series. For India, all the bowlers fired as Shardul Thakur scalped 3 wickets, Kuldeep Yadav and Navdeep Saini scalped a couple of wickets each while, Jasprit Bumrah and Washington Sundar scalped a wicket each.

Now, the third and final T20I will be played at the Maharashtra Cricket Association Stadium in Pune on January 10 (Friday). 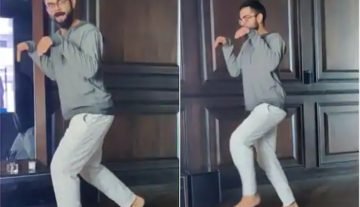