The Royal Challengers Bangalore (RCB) skipper, Virat Kohli might look like one of the most serious players on the cricket field but there is no denying the fact that he is one of the most joyous people off the field. From pranking his teammates to imitating others’ bowling or batting style, the Indian skipper never shies away from putting out his funny side when not in action.

Kohli came up with his funny he was at it again before the start of the game between RCB and Kings XI Punjab (KXIP) on Thursday. The RCB captain was in good mood and he made it clear with his hilarious dance moves during the pre-match training session.

While Virat Kohli has danced on the cricket field a number of times, one can safely say that he is known for producing some of the hilarious moves. The dance steps were random as the batting star did whatever came to his mind and the result was absolutely hilarious.

After winning the toss, RC B decided to bat first and they lost both openers in the powerplay still managed to reach a total of 171/6 in their quota of 20 overs.  Virat Kohli was dismissed after scoring 48 by Mohammed Shami in the 18th over.

As far as RCB’s journey in IPL 2020 so far is concerned, it has been a good one. The Bangalore-based outfit is currently placed at the third position on the points table after its most successful start to an IPL campaign. They have won five of their opening seven matches and are looking set to make it to the playoffs for the first time since 2016. 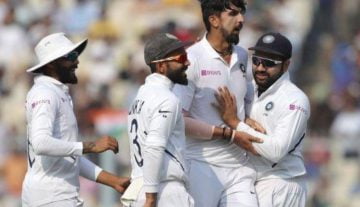