Under the captaincy of Virat Kohli, Royal Challengers Bangalore’s (RCB) 13-year long wait to win the Indian Premier League (IPL) has continued further as they suffered a heartbreaking loss against Sunrisers Hyderabad (SRH) in the Eliminator of the ongoing Indian Premier League (IPL) 2020 by 6 wickets. It was their fifth loss on a trot, will have to settle with the 4th position. Just like the previous few matches, the RCB batsmen failed to do much for teh team as they eventually, failed to post a decent total for their bowlers to defend.

In this highly-anticipated fixture, AB de Villiers amassed 56 off 43 deliveries to take the team towards a total of 131/7. Chasing a target of 131 in 20 overs was never difficult for SRH. However, Bangalore’s bowling unit managed to take early wickets in the game. In such a pressure situation Kane Williamson kept his calm and his knock of 50* off 44 which helped SRH cement a place in the 2nd Qualifier of IPL 2020 against Delhi Capitals.

ALSO READ: Kate Cross Trolls RCB After The Loss With The Viral Quote Of MS Dhoni

Post this painful defeat, RCB skipper Virat Kohli delivered a passionate speech in the dressing room applauding his teammates for a brilliant effort throughout the tournament. He said, “We spoke of creating memories as a team and I think we have done that a lot this season and when we said that this is probably the best environment we’ve played in for RCB, we’re damn right about it.”

He further added, “We came in three weeks before the tournament started got to spend a lot of time with each other got to know each other so well and I think the camaraderie is something that pushed us deep. So there’s a positive already for me there that we’re heading in the right direction and I would just like to thank the support staff as everyone else has and the coaches especially you guys have created a brilliant structure this year and the hard work.”

Further in his speech, Kohli stated that the players should enjoy themselves while being on the field to have one hell of a tournament next year. The skipper added that the team should be proud of what they have achieved in the past seasons.

Kohli elaborated, “Next year probably things might be different, might have a few more allowances we never know but still as long as we keep looking forward to coming back together as a group and really enjoying our time together we’ll have one hell of a tournament next year as well. We can be really proud of what we’ve done after the few seasons that were tough for us and it’s only down to the character of all of you in the change room.” 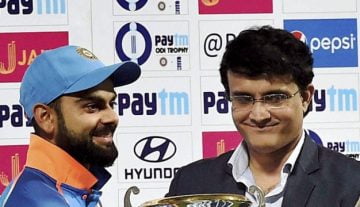