When Shikhar Dhawan was missing the action due to injury, KL Rahul had opened the innings with Rohit Sharma during the limited-overs series against the West Indies. Rahul scored consistently in both T20Is and ODIs in Dhawan’s absence to put pressure on the latter left-hander. With the in-form Rohit rested for the three-match T20I series against Sri Lanka, both Rahul and Dhawan performed well, leaving the Indian skipper, Virat Kohli with a problem of plenty at the top of the order.

Kohli, who bats at No.3, hinted ahead of India’s three-match ODI series against Australia that he might play drop down the order in order to give all three give a run.

Talking about the same during the press conference ahead of the first ODI against Australia in Mumbai, Kohli said, “Look, a guy in form is always good for the team. …You obviously want to have the best players available and then chose what the combination should be for the team. There might be a possibility that all three (Rohit, Shikhar, and Rahul) might play. It will be interesting to see what balance we want to take in on the field.”

Asked if he would have to move down the order to allow the in-form trio to play, Kohli said he would be happy to do so. He said he is not possessive about his position. He said that as the captain of teh team, apart from focusing on the current state of the team he needs to have a far-sighted approach.

Kohli said, “Being the captain of the team, it is my job to make sure that the next lot is also ready. A lot of the other people might not look at it that way, but your job as a captain is not only to look after the team right now, but also to prepare a team that you leave behind when you eventually pass it onto someone else. The vision has to be always on the larger picture and figure out how can you make these guys confident. If at all someone has to take responsibility, it should be me and give the other guys opportunities as well.”

ALSO READ: Virat Kohli Reacts As Jasprit Bumrah Gets Him Out In The Nets

In the third T20I against Sri Lanka, with India batting first and the openers giving the team a strong start, Kohli came out to bat at no.6. He let Sanju Samson come in at the fall of the first wicket, followed by Manish Pandey and Shreyas Iyer. 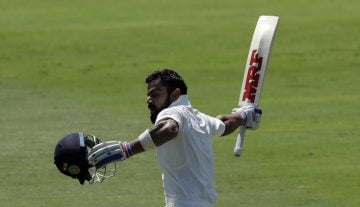 News
By CricShots - May 5, 2018
Virat Kohli Will Not Be Playing The T20I series In Ireland