One Tuesday, the Indian skipper Virat Kohli revealed that the veteran Indian wicket-keeper Wriddhiman Saha will be preferred over the young Rishabh Pant in the three-match Test series against South Africa starting from Wednesday (October 2). Kohli also confirmed Ravichandran Ashwin’s comeback in the playing XI for the series opener against the Proteas in Visakhapatnam.

Pant has been going through a rough patch since the ICC World Cup 2019. While the young southpaw looked in decent touch during the mega event, his performances post the showpiece tournament has been dismal, to say the least.

Talking about the same, during the pre-match press conference, Kohli said, “Wriddhiman Saha will keep for us in this Test series.” He also said that Ashwin will be playing along with Ravindra Jadeja with Hanuma Vihari providing the third spin option.

Pant had given chances across formats during India’s West Indies tour while also keeping the wicket in the recently concluded three-match T20I series against South Africa, however, the youngster has failed to prove his worth with his consistent failures. is wicket-keeping skills were also questioned while his DRS-taking skills have been a constant point of debate.

While on the other hand, Saha has been in his elements since making a comeback after the injury which kept him on the sidelines for more than a year. Saha played his last international game in January 2018 against South Africa and would be looking to cement his spot in Test XI with some eye-catching performance with the willow and gloves.

There is no denying the fact that Saha is one of the best wicket-keepers in the world and the Bengal gloveman has proved his run-scoring pedigree in the domestic circuit as well. He recently struck a brisk 60 against South Africa A in the 2nd unofficial Test in Mysore and has impressed in the ongoing Vijay Hazare Trophy.

India is scheduled to play the Test series opener against South Africa on Wednesday (October 2) in Visakhapatnam. 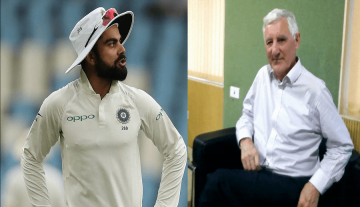