India has suffered another humiliating loss against New Zealand in the second Test 7 wickets and witnessed a whitewash in the two-match Test series. It has also been India’s first series loss in the ICC World Test Championship. While Virat Kohli and his men are still leading the charts in the rankings, the no.1 Test team has a lot to introspect after the consecutive losses, as their batsmen failed to counter swing and seem in both the games.

Apart from that, Kohli, who is touted to be best modern-day batsman is going through a lean patch as he hasn’t scored a century from last 20 international innings. Apart from his batting failure, his nice behaviour on the tour has been discussed a lot on social media as well.

However, on Sunday, Kohli gave an animated send-off to his counterpart Kane Williamson, he was also involved in banter with a section of the crowd at the Hagley Oval. He was also caught stating ‘Shut the f**k up’ to some of the New Zealand fans after picking the wicket of one of the Kiwi batsmen.

On Day 3 of the second Test, Virat was also heard saying a rather controversial statement during New Zealand’s chase when Team India was defending a low total of 131. As per the quotes in the Indian Express, he was standing in the slips for the majority of the innings where he was heard saying, “Jab India mein yeh log aayengey, tab dikha doonga (I will show them when they come to India).”

While it is wrong on Virat’s part to say something like that and if he has actually said it, it also shows his confidence while playing at home. In the previous home season, the number 1 Test team was undefeated, blanking South Africa and Bangladesh comfortably in three and two-match series respectively.

ALSO READ: VVS Laxman Lashes Out At India For Lacking In Discipline

They are yet to lose a Test series at home since the 2012/13 when they suffered a loss against England. In the last few series, they have become a team to beat having lost just one Test to Australia in 2017 while winning most.

It will be interesting to see now how New Zealand perform when they travel to India next time around for a Test series. 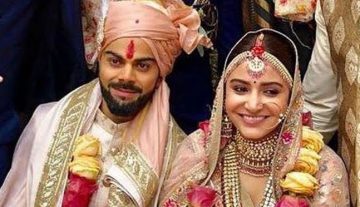 Features
By CricShots - May 5, 2018
PHOTOS – Beautiful WAGs Of The Famous RCB Players