Ahead of the Indian Premier League (IPL) franchises, barring Chennai Super Kings (CSK), have started their preparation for this year’s edition which is scheduled to be taking place in the UAE. Royal Challengers Bangalore (RCB) skipper Virat Kohli said he was some of teh first ones to be happy that the T20 league is finally going to take place, after a long delay due to the coronavirus pandemic.

The Indian skipper said that there was a point in time when it was even difficult to imagine whether the IPL will be taking place on or not. In a video uploaded by the RCB Twitter handle, Kohli was heard saying, “Couple of months of ago you couldn’t imagine we will have IPL firstly and then things started opening up and we saw other tournaments taking place and got a bit of confidence from that.”

Teaser: Virat Kohli Exclusive Interview. @imVkohli shares his thoughts on stepping onto the cricket field after a long break and much more, on Bold Diaries! Head to the RCB App to watch the full interview. #PlayBold #IPL2020 #WeAreChallengers pic.twitter.com/lJbyFUwLyQ

Like most players, Kohli had finally made a comeback to the net session fter a long lay-off and was skeptical on how much he will be able to achieve in his first net session in months. Kohli, who recently announced that he and his wife Anushka Sharma are expecting their first child, further said that he had a “nervous” and “jittery” feeling before RCB’s first practice session.

In the video, Kohli said, “Now when we had our practice session yesterday is the time I realized how long it has been. When I was heading to the practice session I felt nervous, I felt jittery but things were okay.”

Kohli was bought by the RCB since the inaugural edition of the tournament in 2008 and is also the top run-scorer in the tournament’s history. Despite being the best batsman for the franchise, Virat Kohli is yet to lead RCB to lift their maiden IPL trophy. Under Kohli’s leadership, RCB has reached the final once.

They had a terrible season last year as they finished at the bottom of the points table. However, this year they would hope that change in venue and environment will work in their favor and they will be able to break the deadlock of the title drought and lay their hands on the IPL trophy for the first time. 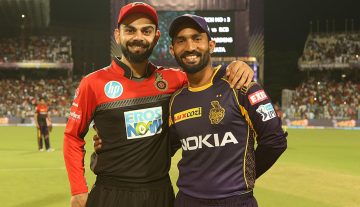