Virat Kohli’s childhood coach Rajkumar Sharma came in defense of the Indian skipper. He supports his ward’s on-field behavior, saying that the latter never crossed the thin line between aggression and misbehavior. He feels that there is a fine line between misbehavior and aggression.

Talkin to a group of reporters in Navi Mumbai on the sidelines of the DY Patil T20 Cup, Sharma said, “When he (Kohli) is doing well with the same aggression for the country, then everyone appreciates. I have always believed that yes, aggression is his strength, but there is a thin line between aggression and ‘battamizi’ (misbehavior). He never crosses that line, and he should not. Aggression pumps him up to do well.”

On day two of the second Test against New Zealand in Christchurch, Virat was at his animated best while celebrating the dismissal of his New Zealand counterpart Kane Williamson. Kohli also gestured the crowd to keep quiet. He is also going through a lean patch in his career as he scored just 38 runs in the Test series, but Sharma isn’t much concerned and feels that the Indian skipper will be making a huge come back.

Describing the same, the 54-year-old coach asserted, “Every player goes through a lean patch. There is something called the law of averages in cricket. He is too good a player and he knows where it is going wrong. We have already discussed that. He will be back. He is a magnificent player. In the upcoming (ODI) series (against South Africa), he will show what he is capable of.”

Sharma said that his ward has been batting well but unfortunately was getting out. Virat was finding it challenging to negotiate seaming deliveries in New Zealand. Sharma, though said, that one cannot judge a cricketer by his performance in two matches.

When asked if Kohli should got for a stint with an English county team for some improvements, Sharm replied, “First it was being said that he will not score runs in England. When he scored runs there, then everyone said ‘he plays swing bowling very well and he is a perfect player’. It is a temporary phase and it will go away.” 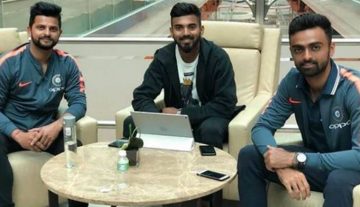