The fiery Indian fast bowler, Umran Malik may have broken out of obscurity in the 2021 Indian Premier League (IPL) but he continues to hogg a lot of limelight with his sheer pace. In the first T20I against Sri Lanka on Tuesday at the Wankhede Stadium, Umran kept on bowling at a pace that was in excess of 90 mph consistently and even he fired a thunderbolt of 155kph and eventually, smashed the record for the fastest delivery bowled by an Indian.

His pace has led to batting great Sunil Gavaskar stating that he has never been this excited about a young Indian pacer since watching the legendary Sachin Tendulkar. Vivrant Sharma, Umran’s longtime friend and his J&K and now his IPL teammate with the Sunrisers Hyderabad (SRH) has given a glimpse into what it is like to face him as a batter. Vivrant has opined that Umran gets pumped up when cheers come his way, even in the nets.

During a recent chat with the Indian Express, Vivrant said, “Even on the nets if people start cheering for him, it gives him an adrenaline rush. He will start bowling more quicker. He just wants to go hard at the batsman and in the nets, you don’t have the concept of no-ball, 22 yards reduce to 18, and if few people start chanting his name, then only God can save you.”

Vivrant also revealed that such is the ferocity of the pace of Umran Malik that facing other fast bowlers feels easy after playing against him. He explained, He bowls at 160 in the nets and after facing him, it is very easy to face bowlers with the speed of 135.”

Raman Thaploo, a cricketer from J&K who has watched Malik’s journey closely, also said that SRH’s bowling coach, the South African legend, Dale Steyn, gave Umran a peculiar bit of advice in order to tell him to never lose his pace. Thaploo said, “Dale Steyn told Umran, ‘You are born to ride a Ferrari, never switch to a Fiat’.” 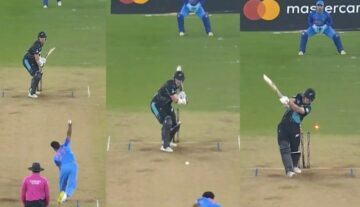