Whenever India takes to field nowadays, the fans always look forward to the performance of the premier fast bowler, Jasprit Bumrah. His meteoric rise in international cricket over the years has made him a premier fast bowler and even a slight dip in his form leaves the Men in Blue in some serious concern.

After conceding a 2-0 series lead to New Zealand with one match to go, former India batsman VVS Laxman was one who expressed his dejected mind on the 26-year-old who made a return to the national squad recently after an injury break. Bumrah, who bowled a phenomenal spell of 3 for 12 in the fifth T20I match against New Zealand in Mount Maunganui recently, has got only one wicket in his last five ODI matched and that has made the 45-year-old Laxman worried.

In his column for the Times of India, the former stylish batter wrote: “It must be a cause for concern for India that Jasprit Bumrah, Virat Kohli‘s go-to bowler whenever he has needed breakthroughs, has been short of wickets all tour. Additionally, his lengths to haven’t been spot-on, which means he hasn’t been able to impose usual pressure. Of course, New Zealand’s batsmen have played him well, with Taylor at the forefront.”

Bumrah failed to live up to his expectations as he has failed to pick a single wicket in the first two ODIs and conceded more runs than expectations. He conceded 53 and 64 runs, respectively, in the two ODIs and that let the Black Caps batsmen off in both matches.

Laxman also wrote that India would have fancied their chances of leveling the series in Auckland but the loss of three wickets in the first 10 overs, including that of Virat Kohli, pegged them back. He also lauded Tim Southee’s bowling performance and the delivery that got rid of the dangerous looking Indian skipper.

Former Indain cricketer wrote: “At the break, India must have fancied their chances of drawing level, but when you lose three wickets in the first ten overs, including Virat’s, you are always playing catchup. Tim Southee’s dismissal of Virat was an example of New Zealand’s smartness in working out and sticking to game plans. Even though he was physically suffering, Southee kept at it. He set Virat up with a series of away swingers, then brought one back in to sneak it through the gate, a fantastic piece of bowling.”

India started off as favorites in the ODI series after sweeping the Kiwis 0-5 in the T20Is but allowed their reputation to take a beating. They posted a humongous total of 347 for 4 in the first match in Hamilton but then allowed Kiwi to chase down the total. In Auckland, too, they were in complete control of the match by having eight wickets down for 190-odd but then the hosts ran away with the game by scoring 273. 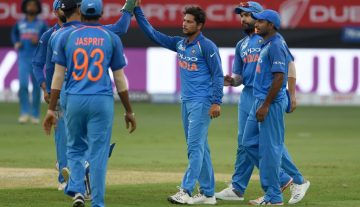