Sunrisers Hyderabad (SRH) are locking horns with Lucknow Super Giants (LSG) in match 12 of IPL 2022 at the DY Patil Stadium in Mumbai. This is the second match for SRH, while the third for Lucknow. Lucknow is heading into this game after a big win over CSK while SRH lost their campaign opener against Rajasthan Royals (RR). Washington Sundar playing for SRH gave his team a great start as he picked two early wickets.

Washington Sunday dismissed Quinton de Kock in his very first over and came back to dismiss the dangerous Evin Lewis in his second over. Lewis scored one-off just five balls and survived a close LBW appeal in the over before he was dismissed. Lewis tried playing across the line against Sundar trying to seep him off his length.

ALSO READ: Venkatesh Iyer Had A Funny Conversation With An Actress

However, the ball which dismissed him came in after pitching and was going on to hit the leg-stump. Lewis after scoring a match-winning 55 in LSG’s previous game against CSK accounted for just one on his next.

Here is the video of the wicket taken by Washington Sundar:

Earlier in the game, Sunrisers Hyderabad won the toss and opted to field first. They are playing an unchanged side after losing to the Rajasthan Royals in their first game. LSG brought in specialist all-rounder Jason Holder into their playing XI.

During the toss, Kane Williamson had said, “We are gonna have a bowl. We did take the conditions into account, we have seen similarities in a number of the early matches and trying to get something from the surface first up and maybe some dew later on. We are playing the same team. It’s good (elbow injury) and nice to be out here playing, looking forward to the game today.” 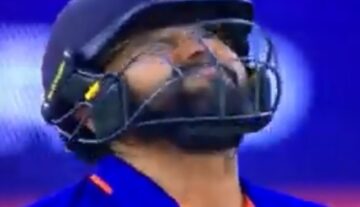